Which board game does Nash play in the movie "A Beautiful Mind"? [closed]

In the movie A Beautiful Mind, around the 9th minute, what is the name of the game they play?

Why is Nash so surprised at losing this game?

It is a Go board. However, the game played is Hex 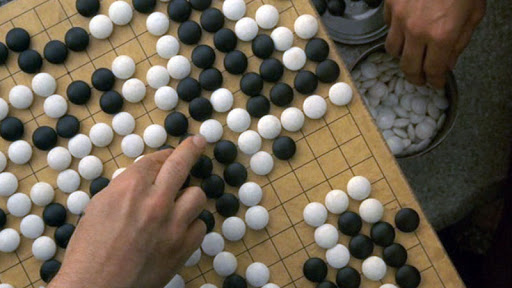 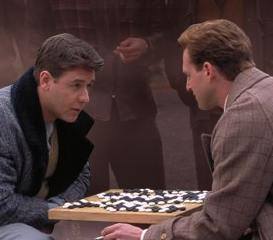 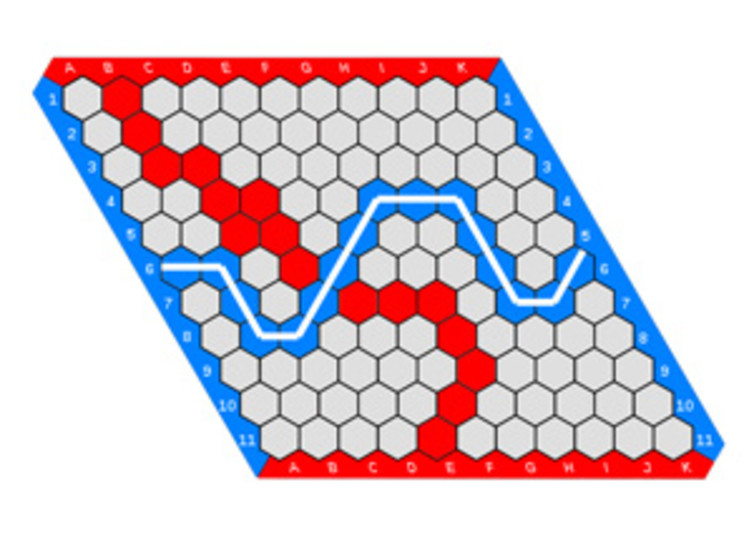 Hex is a strategy board game for two players played on a hexagonal grid, theoretically of any size and several possible shapes, but traditionally as an 11×11 rhombus. Players alternate placing markers or stones (Go stones make ideal playing pieces) on unoccupied spaces in an attempt to link their opposite sides of the board in an unbroken chain. One player must win; there are no draws. The game has deep strategy, sharp tactics and a profound mathematical underpinning related to the Brouwer fixed point theorem. It was invented in the 1940s independently by two mathematicians. The game was first marketed as a board game in Denmark under the name Con-tac-tix, and Parker Brothers marketed a version of it in 1952 called Hex; they are no longer in production. Hex can also be played with paper and pencil on hexagonally ruled graph paper.

Recall that in the movie, Mr. Nash looked amazed at losing. "But...I had the first move. And I played perfectly!" This is because the game Hex is "solved." With perfect play on a symmetric board, the first player will ALWAYS win. Nash himself proved this in 1952, so this scene was another reference to Nash's mathematical work.

However, proving the existence of a solution does not necessarily mean you can execute it perfectly every time (the proof in this case was not even a constructive one, Nash doesn't have an algorithm for winning, just proof that such a solution exist!).

Go boards are frequently used for Hex games, and many people have confused the two while watching the movie. Go is also both more popular and more complicated game than Hex, lending to the confusion.

Nash is also credited with inventing a game, eventually marketed by Parker Brothers as a board game called Hex. This game, played on a parallelogram-shaped field of hexagonal cells, was discovered independently in Denmark around the same time. In Princeton it was called Nash, after its creator, or John, a double entendre involving the fact that it was played on the tiles in the mathematics department’s men’s room floor. There are two players, each of whom has tokens of a single color (red and blue, say). The object is to form an unbroken path from one side of the board to the other before one’s opponent does the same in the opposite direction.

There are online versions of the game. The first player always has a winning strategy; that is, the player who makes the first move can always win, provided he executes the proper sequence of moves.

Clip - A Beautiful Mind - "The Challenge" - A Game of Go:Youtube

Actually, according to the script, that's Go, not Hex:

All right, who's next?

No, I've played enough "Go" for one day, thank you.

Come on. I- I hate this game. Cowards, all of you! None of you rise to meet my challenge? Come on, Bender. Whoever wins,Sol does his laundry all semester.

You can hear the conversation and that they clearly mention Go in the clip linked to in Mary's answer.

Since they claim it's Go, right there in the movie, I don't see how it could be anything else.

Not the answer you're looking for? Browse other questions tagged analysis a-beautiful-mind .

15
Why are those robots called Jaegers?
5
Why does the father lose his mind?
2
Why are there no computers in Saajan's office?
3
Understanding the "secret" message of a scene in the movie, The Water Diviner
18
How did Hugo not lose weight while on the island?
9
What was the significance of the chess piece?
12
Why were certain shots deliberately paced slowly in 2001: A Space Odyssey?
14
Is there a consistent transcript of the chess game between Sherlock Holmes and Moriarty?
62
How does the title 'The Imitation Game' justify the story of the movie?
3
What are the characters thinking/trying to convey during the scene where Cheyenne first meets Harmonica?