Could someone actually survive an F-5 category tornado in this manner?

In Twister, there is a scene near the end of the film featuring Bill and Jo strapping themselves onto a metal pipe that apparently goes down into the ground 30 feet.

Here! These pipes go down at least thirty feet, if we anchor to them we might have a chance!

Bill and Jo then strap themselves onto this metal pipe while an F-5 category tornado goes over them:

Could someone actually be able to survive a tornado this way? How did Bill know that the pipes went down into the ground 30 feet just by looking at them?

I see many problems with this scene...

As seen above if whole houses are disintegrated, I find it highly unlikely our heroes made it out of that one in one piece, let alone alive.

A real F5 tornado in 2011 killed 168 people in Joplin, MO. Researchers theorize that most of the damage caused is from substandard building design.

That isn’t true. Properly built, above-ground safe rooms — typically a hardened indoor closet or room reinforced with concrete and steel — are just as safe as underground shelters, says Texas Tech’s Ernst Kiesling, who’s also the executive director of the National Storm Shelter Association. In fact, above-ground safe rooms can be safer because they’re more likely to be used when severe storms move in, he says.

There have been no reports of any deaths in properly built above-ground safe rooms, Keisling says.

For Bill and Jo to survive they would have had to get to a proper shelter.

Twister is a steaming pile of Hollywood horseshit. Almost nothing depicted in this film is realistic.

First to the metal pipe.

We can realistically estimate the amount of force someone will experience in a F5 tornado. The free fall terminal velocity of a human being is approximately 55 m/s (120 mph, 200 km/h). This means that the wind speed has exactly enough force to lift the weight of the human body. Now an F5 starts with 116 m/s (260 mph, 420 km/h) which is the nearly exactly two times the terminal velocity speed. Unfortunately for our daring heroes wind force squares with linearly increasing speed, so the actual force quadruples.

If Bill weighs 1000 N, he is pulled with a force of 4000 N (!). And not with a securely fitting harness used on the thigh like a climber which can actually hold this amount of force, but with an improvised leather strap around the upper torso. If the heroes don't get ripped out immediately, they wish they were because the leather will tear off the muscles and ligaments.

What is also wrong is the convenient floating: Tornado wind is highly turbulent, they will be flung around like laundry (Which is the reason why I did not use the higher fall velocity for being head-on; They cannot hold that position). But the pipe does not even budge or bend which is strange when someone realizes that it is being pulled with the weight of approximately 8 humans.

Next question: What is softer: Tree bark or human skin ?

Well, all the flying debris does that to tree bark (and this was an actual F5): 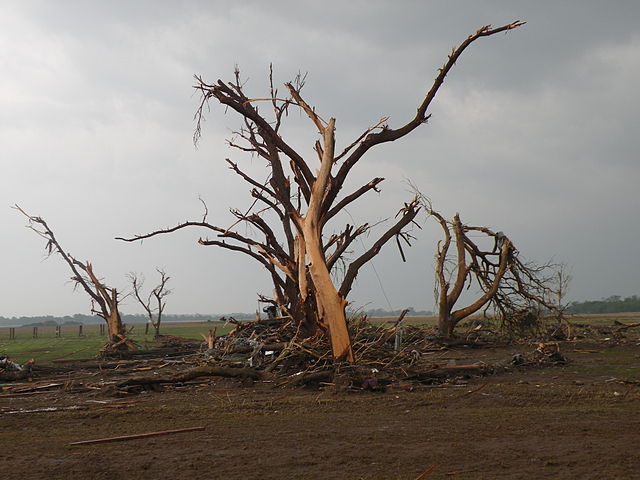 I hope the answer to what will happen to two idiots strapping themselves inside an F5 tornado is now clear: They will be mutilated and flayed alive.

I am inclined to think that one would be required to remove debris from the equation before any answer beyond "no" would be possible - as the simplest pieces of debris have shown to be highly penetrative in such a force of nature.

I am certainly inclined to say that strapped in such a matter you would probably flutter around several times which would very likely lead to a fatal clash with the ground, if not some unfortunate whiplash.

@PCARR Is 100% correct. I know because I speak from experience and I know first hand the horrific damage an f-5 does because I lived through one and not just any one but one of the most powerful tornados EVER, Jarrell, TX on May 27th 1997. Anyone who knows anything about tornados or is intrigued by them knows about this tornado as it has done things that have still yet to be rivaled statistically. I will admit when I say I lived through one, I don't mean directly hit but that growing up my family lived in Round Rock, TX and had a dove hunting spot in Jarrell. I was young and in cub scouts at the time so in the aftermath of the tornado, the local scouting community wanted to help and so we were tasked with going around these communities and helping those who had just lost everything. Basically we stayed around cedar park where the tornado had weakened into f-3 damage which was still pretty incredible. The only place we didn't go was Jarrell bc after the tornado, it was gone.

This is something that you can't really just put in the news and violence the media doesn't usually broadcast because it's brutal and it's just one of those things that if you lived there then you'd know about it bc you were local or knew someone that was directly affected. All I can say is, we never went hunting in Jarrell again afterwards. This is what was witnessed locally and I doubt you might find footage or as clear of a description of what it did to people and structures.. it literally ripped them to pieces. The force of this thing and its power were so overwhelming that to agree with the post about being mutilated is an understatement. I mean I don't know of a word to describe it other than saying it blended people, debris, animals, other things in nature together to where you couldn't even tell the difference between human remains and animal remains. If you were in it during its f-5 strength you witnessed something that there was no advice they give to help keep you safe. There was no innermost room, no above ground shelter, no ditch or any other way to escape and survive a direct hit. You had to be underground. I know some people will say Jarrell, TX "That's out in the boonies" or "Ole southern country" but it's not what you would imagine. These weren't just cheap houses, trailers, and mobile homes. These were well built brick homes with solid foundation too and not only did this tornado wipe the foundations clean of the house... it was so intense it ripped the pavement from roads, bark and limbs from trees and uprooted them. It took parked vehicles and moved/ threw them over half a mile. Someone might want to fact check me if they know where they can validate it to be exact but I want to say it also scoured the ground itself up to 20in maybe just shy of 2ft. I don't recall the exact measurement but it def ripped up ground and by ground I mean earth and pavement as I mentioned earlier. So to say that they would be mutilated is 100% correct and the comparison to sky diving or extreme situations where ppl survive wind speed comparable to an f-5 either there's a calculation issue with comparing the f-5 numbers to the extreme winds exposure situation or the data for one or the other is completely off bc I can guarantee that regardless of sky diving, or strength of leather straps, or skin being stronger that bark or whatever other thing I've read that there is no way to survive a "DIRECT HIT" of one of the inner vortices of a tornado that strength by trying to anchor like that. I believe even without debris it's still impossible. The only way to be directly hit and survive is maybe if you never get hit by any actual vortices and end up still in the tornado but more so towards the outside to where you dodge the strongest parts which is actuality common. I saw an entire house destroyed in the days after the local outbreak.. all but a young girl about my age sitting in a recliner across from where their tv still sat completely unscathed from the rest of the house. She told me what it was like when it hit and that the somehow it left the TV and the chair despite taking walls and roof next to where these things sat.

Not the answer you're looking for? Browse other questions tagged realism twister .