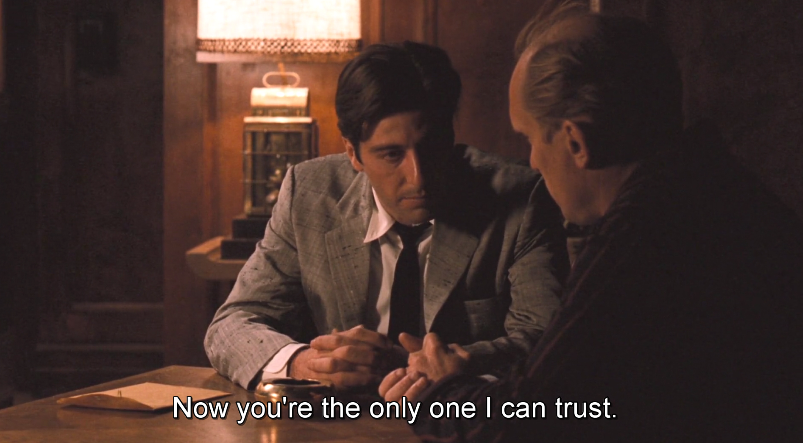 As Sonny said in Godfather I "You're not a 'Wartime' consigliere." Meaning you don't know what to do or have the balls to do what is necessary at times of war between the families. We all know Tom as the mature, intelligent, intellectual, calm, quiet one of the bunch. Adopted off the streets by Vito Corleone. So when it's Mike's turn he fires Tom as consigliere and keeps him on as his Lawyer. Michael respects Tom and doesn't want him knowing or seeing all the dirty deeds that have to be done to stay on top. This also allows Tom to be an unbiased shoulder to lean on in times of trouble. Tom isn't built to be a Wartime consigliere, not because he doesn't trust him or because Tom isn't smart..it's because it just isn't Tom's nature to go around killing people. Just like when Sollozo talks to Tom after the attempted assassination of Don Vito Corleone, Sollozo says," Your boss is dead. I know you're not in the muscle end of the family,Tom, so I don't want you to be scared. " So it's simply because Tom's just a non-violent guy.

The reason he was removed was that when Michael became the New Goodfather in the first part he puts his father as consiglierie. ( if he would need one ) Tom is a lawyer who should not know about the brutal murders Mike Will order in the future. Mike becomes Goodfather 1954 and Vito dies 1956. So at least he had his father as comsiglieri for 2 years. Mike takes the Corleone family to much higher power than his father. His father had to fight the 5 families in New York. And There was a commision Where all the maffia heads of families met. Michael kills all the heads of the 5 families + other important characters. After that he becomes the most powerful maffia Don in the USA so the commision has No importances anymore and disappears. All other Dons has to Ask him so there is No need for a commission anymore because Michael is so much more powerful than all the other dons. He has become the absolute most powerful crime boss in USA.

I still haven't found a satisfying answer to this question. I suppose the best is about him not knowing about the murders of the heads of the families but he knew about the murder of mccluskey and solozzo.

In my opinion, it was just a plot development piece to show how he was having to make the tough decisions. Vito isn't under him and Santino is dead, there aren't many characters left that the audience has enough respect for that would show this. Certainly not clemenza nor fredo.

I think they knew this was a bit if a hole and tried to tidy it up in Part II with Michael telling Tom he is the only one he can trust.