How was this possible at the end of Say Yes?

I may have missed something but in The Walking Dead Season 7, Episode 4 - Service The Saviours came to Alexandria and took ALL of the guns, After Negan remembered that Rick and his group had "an assload of guns.

They went through the invoice, and when they realised that they were missing 2 guns Olivia was threatened, until the guns were found in Spencer's house.

Rick even handed over the rifle that Michonne was practicing with and attempting to hide.

From then on in the Alexandrians are not shown to have any guns except for:

Rick when Daryl gives him his Python back

The focus of Season 7, Episode 12 - Say Yes was Rick and Michonne trying to find guns to fulfil their bargain to Jadis.

How then, at the end of this episode

Rosita leaves Alexandria and turns up at the Hilltop, in what appears to be a confrontation with Sasha. However Rosita tells Sasha how the group aren't ready to fight Negan yet and wants Sasha's help in killing him. She then opens a bag and pulls out a scoped rifle.

This looks like the rifle that Sasha has used throughout the series. Sasha even give a bit of a look that made me think she was being reunited with her old gun. How did this rifle miss being taken by the Saviours and why was no mention made of it till now.

Especially as Rosita went through the hassle of getting a bullet made.

Or is it just that Rosita stole one of the guns that Rick and Michonne found, that looks like the one Sasha used to have and it just hasn't been noticed yet?

Caution: This whole answer is a spoiler.

The sniper rifle Rosita handed her is a quite different rifle to Sasha's old one. 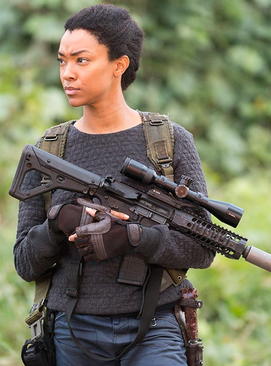 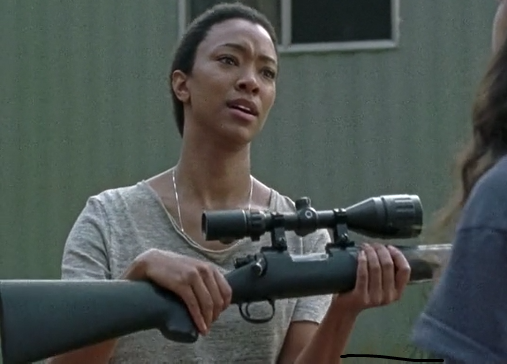 Even without the visual proof above, the "new gun" plot was reinforced for me when Sasha checked it out in a way one checks out a new object rather than a familiar one, and gives an approving look.

Rick went back to Alexandria before going to see Jadis. We know this because Rosita et al are with Rick when they visit Jadis to drop off the guns.

Since the return to Alexandria was not shown, Rick could have stayed there quite some time and Rosita could have had ample opportunity to take one of the many firearms Rick brought back, their being so numerous it is entirely conceivable that one could go missing without being noticed.

4
Where does the gun suddenly get extra bullets in season two of Lost?
4
Why does Negan kill this character in TWD S07E08?
7
How did Rust know the shot was coming right there in True Detective S1E4?
10
In the season 8 finale of the X-Files, what is Alex Krycek's motivation in this scene?
11
Why won't unhappy Ricks just leave the Citadel of Ricks?
4
Who machine gunned the Saviours that Carol was being held at gunpoint by?
6
Why did Rick decide to keep Negan alive?
3
Why take that "glass floor" risk in the museum?