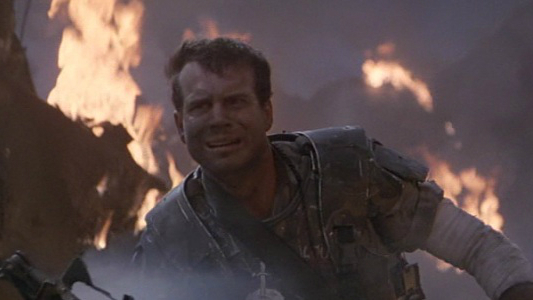 These iconic words were uttered by the late, great Bill Paxton in Aliens.

So...where did they come from?

It was the idea of Bill Paxton.

As it was told to UPROXX by Bill Paxton himself,

I'm not great at improvising on the spot. The stuff I improvised was stuff that wasn't in the script, but it was stuff that I'd throw at Jim [Cameron] in a rehearsal. Jim is a — his mind's like a steel trap. He'd remember something I'd said when we were rehearsing at a scene we were shooting 2 months later. He'd say, 'You said something when we rehearsing to Sigourney. You said something about the express elevator to hell…put that in here.' That was kind of cool, that was kind of fun. 'Game over, man,' was really the background of the character.

I figured…[Hudson] was kind of the enlisted version of Gorman who was the officer, [played by] Bill Hope. He probably came up on video games and back in those days you always … I don't think they do it anymore because I don't play video games but it always at the end of your quarter, [it said] 'Game over.'…'Wow, has anybody ever used that, I wonder? Because it's good.' I had no idea it would catch on.

Not the answer you're looking for? Browse other questions tagged dialogue aliens .

4
What's the German quotation in The Sunset Limited?
2
What's the origin of the quote "You da man, Harry. You da man."?
6
What's the origin of "Choose life" phrase?
15
What does Newt say at the end of Aliens?
1
What's with Mamet's dialogue style?
30
The Usual Suspects what's the joke?
10
In "Don't Just Stand There" (1968), why was it a compliment to ask a girl if she was "Pamela McCarthy"?
8
Meaning behind "Our source was The New York Times"
2
What's the meaning of "COS"?
9
What's happening exactly as before?