Who is the blue elf lady in the Bad Anon meeting?

In Wreck it Ralph, the video game bad guys are having their Bad Anon meeting. I've been able to identify all the bad guys in the meeting, except for the blue elf lady in the red dress. In the picture below she's in the bottom left corner.

It may be Mishaela, a minor villain from Shining Force. Same pointy ears and blue skin and belt, though her hair is usually shown as purple and her dress a bit less sexy! 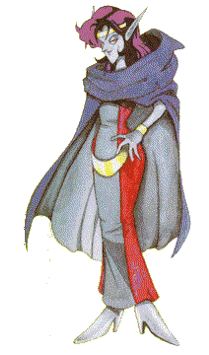 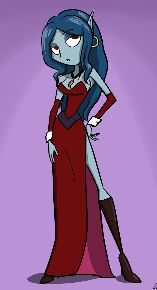 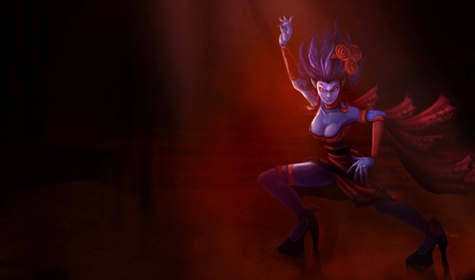 Though she is not a villain in the game itself, she is known as The Widowmaker and when picked in the game, generally causes a lot of panic to the opponents, as she has a deadly stealth mechanic and is typically known for nuking enemies, when played properly.

I think she is a Minor Boss-thing Lady from Zelda....one of the old versions. Her minions tried to kidnap Zelda from Link..

I always thought he tentacle green monster was from Mario or Kirby,Prabally wrong. But the elf
girl,perhaps a majorly changed look from Vaati from a legend of zelda game.But I'm just guessing.(is that guy nex to Bowser and eggman from Street fighter?)

The beholder in dungeons and dragons is able to change its size and yes it has tentacles but there are eyeballs at the tip of each tentacle and it does have one eye. Only thing wrong with it is that it is green—the original color is a purple gray color. I know this because I am a fantasy nut. So yes, it very well could be a beholder or maybe Disney used the idea and made it their own. As for the blue elf, I think she's from Zelda. I'm a full time gamer so ask me anything

Also known as Michaela, Mishela is a powerful wizard and a prophet from Sega's Shining Force series of RPGs.

She is probably Morag from dragon quest 9. She is the boss who loved the knight

Not the answer you're looking for? Browse other questions tagged character wreck-it-ralph .

4
Who is the Lady of the Wood, and what's her relationship to the rest of the elves?
5
What was Quint eating in the town hall meeting?
13
Why are the Na'vi in Avatar blue in color?
2
What is the story behind Lady Melisandre?
5
What was the nature of Dobby the Elf?
15
What does the “Blue” in “Blue Raja” mean?
9
Why does Katherine take the blue binders to the washroom?
18
Is Lady Stoneheart's absence from the show explained?
42
Who's this lady in the war room?
0
Creepy Ancient Lady in the Bathtub in Doctor Sleep