Why is Thea Queen nicknamed "Speedy" instead of Roy Harper?

Traditionally (in the comics), Roy Harper is the superhero (and sidekick/partner of the Green Arrow) known as Speedy; before assuming the alternative identity, Arsenal, and eventually, the Red Arrow. 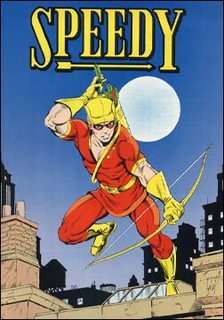 In the show, Oliver Queen calls Roy by the name, Speedy once or twice, but ever since the first episode, it's been his nickname for his younger sister, Thea Queen.

For starters, Oliver doesn't actually call Roy "Speedy". It's a bit confusing, but in the scene you're thinking of, when he yells "Speedy" at Roy, he's yelling Thea's name at Roy to remind him of his girlfriend, and snap him out of his rage. There's also another scene where Lyla calls Barry "Speedy" but Oliver thinks she's talking about Roy, but it's clear he's confused by the nickname. As far as I know, Oliver has only ever used that nickname for his sister.

The show has done quite a lot of shuffling around with it's source material, and this is just one more instance of it. They want to tell their own story, not just copy the comic books verbatim, They want things to be familiar to those who already know the stories, but also want it to be new and interesting in some way. So, the writers they pick elements from the comic book canon that they like, but use them in whatever way makes sense.

The character of Thea Queen was invented entirely for the show, but she's basically a mash-up of the comic book Roy Harper and Mia Dearden characters. The comics Roy was a "ward" of Oliver's, which was transitioned into "sibling" since Oliver's younger in the show and his mother's still alive. Moira Queen's maiden name is Dearden, which also became Thea's middle name. When Thea was in Corto Maltese with Malcom she used the alias Mia, thus making her Thea "Mia" Dearden Queen. So it makes sense that she would eventually become Speedy, while TV-version Roy becomes Arsenel.

They have done similar things with other sidekicks. Black Canary is the most obvious one: in the comics, Dinah Drake was the original Black Canary; she married Larry Lance and had a daughter named Dinah Lance, who eventually became the Black Canary. In the show, Dinah Drake and Quentin Lance had two daughters; Sarah Lance became the first Black Canary and her sister Laurel Lance takes over after her death. (In reality, both characters are named Dinah Laurel Lance, but they commonly go by different names.) Again, Laurel's name was a clue to comic fans that eventually, Laurel was going to put on the costume, but her path to get there was much different.

19
Why was the "Green" removed from "Green Arrow"?
1
Why didn't Oliver Queen rescue Walter sooner than he did?
13
What did Oliver Queen say to the Russian guard in S02E06?
4
Why does Sin call Roy "Abercombie"?
3
How much resemblance is there between the "Arrow" TV-series and the "Green Arrow" comics?
2
Is Roy based off of a comic book character?
4
How many languages does Oliver Queen speak?
0
In Arrow, why was Starling City renamed Star City?
4
Why didn't Arrow (Oliver Queen) just become part of the League of Assassins?