Was Keanu Reeves cast due to his past hockey experience?

Keanu Reeves portrays a goalie named Heaver in the 1986 film Youngblood. He was actually an exceptional hockey player in High School and was voted MVP by his fellow teammates and nicknamed "The Wall" for his goal keeping skills.

A photo of a young Keanu Reeves on his High School Hockey team: 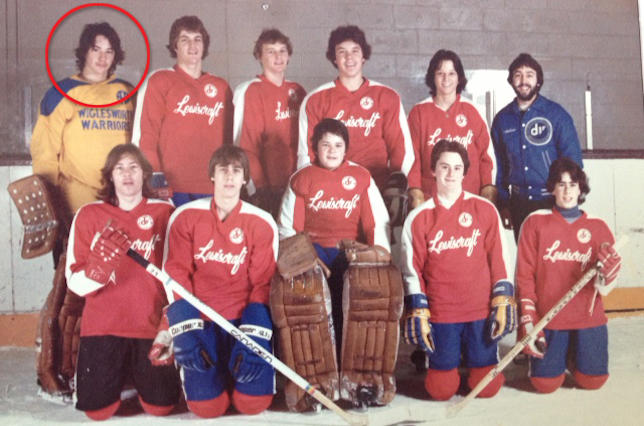 Youngblood is the second film that Reeves starred in as he was still a struggling actor when he was cast in the film.

After watching his acting in the film, it is apparent that this is only his second film due to his inexperience showing on camera.
Is there any evidence that Keanu Reeves was cast in Youngblood just because of his hockey skills?

There is some evidence that his hockey skills may have played a part in landing him the role, however it's fairly soft.

Point #1 - Reeves was good enough as a hockey player that he was invited to try out for the OHL (Ontario Hockey League), which is one of the three major junior leagues in Canada (Similar to the A, AA, AAA farm system in baseball).

The owner of a summertime goaltenders school thought the same thing and helped secure a free agent tryout for Keanu with the OHL’s Windsor Spitfires. It was a huge opportunity for someone who wasn’t heavily scouted.

On the verge of testing himself against some of the best teenagers in the province, Keanu respectfully declined. He followed his heart and decided was going to be an actor.

Point #2 - He had already had a few roles in TV and theater in the local area, so he was known locally and pursuing acting, and also had an agent:

After high school, the star took acting courses at night, then joined community theater productions and got an agent. His first professional roles was on a local Toronto television program called "Hanging In," where he played a "tough street kid."

Reeves followed up his role on "Hanging In" with more local theater and film productions, before moving to LA in in 1986.

Point #3 - In an eBook by a celebrity biographer, the following passage appears:

Heartthrob Rob Lowe had been cast in the lead role from the picture's inception, but the producers wanted to source local Canadian talent to fill in some of the film's key supporting roles in an effort to add to the authenticity of the film, as well as to keep budgetary costs down.

Point #4 - Hockey News ran an interview with the makers and some of the players in Youngblood, where they point out that many of the players on the teams were OHL and NCAA players at the time, so it's possible that Reeves would have been remembered.

I could find no interview (Even old local Toronto interview vid clips) where he directly says that being able to skate was the primary reason, however if his agent was any good they would have been sure to point out his hockey ability to the group. It may not have been THE reason he was cast, but he would have been that golden child, an actor that could actually skate, rather than one or the other.

Not the answer you're looking for? Browse other questions tagged casting youngblood .

10
Was casting adults as teenagers more common in the past?
2
How was cast selected in the show Louie?
14
Is Ewan McGregor in The Force Awakens? If so, what was his role?
25
Was Deborah Voorhees cast due to her surname?
1
Why did John Goodman say he was sandbagged by being cast as Fred Flintstone?
2
Why was Edward Norton's name not featured in the cast of Alita Battle Angel?