What’s up with the weird therapy room in “The Six Thatchers”?

At the end of The Six Thatchers, Sherlock is having a therapy session. We get two angles at the room in which this is happening: 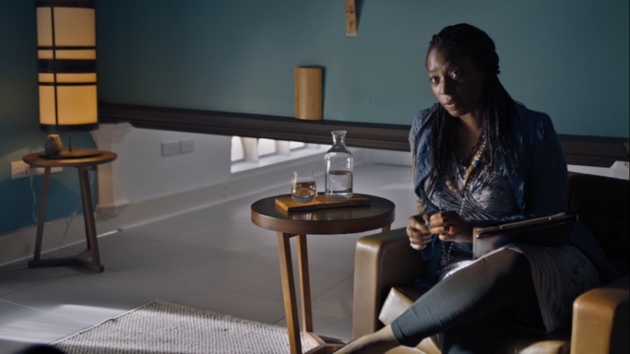 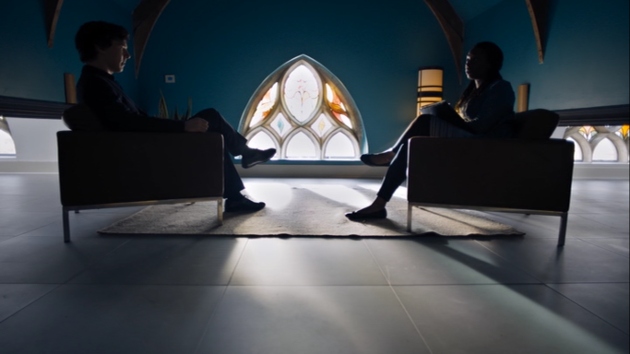 Unless I am very much mistaken, this suggests the following layout of the room (cross-section from the perspective of the second still):

I find this layout bizarre:

Another bizarre aspect are the windows, which are almost based at ground level. This suggests that the room was once bigger and horizontally split, with the therapy happening in the upper part. But this still does not explain why the walls have not been extended to the ground.

It looks a little like a converted church. An architect would have added an additional floor to a church with originally incredibly high ceilings, and the upper floor then only retains the upper portion of the window. The windows in your example seems to be the correct shape to fit this type of building.

Here is another example:

As for the odd three quarter wall, it should be in fact just a wall, but it doesn't extend entirely from ceiling to floor. This will be because the windows will not let enough light in on their own, so a gap is added at the bottom of the wall in order to let more light into each room.

Of course, for a confidential therapy session this is an absurd setting, as anyone in any of the other rooms would be able to hear every word being said. However it is likely a real place, rather than a constructed set. I would speculate it was chosen as a setting for this scene because it is so wide open, and has a uniquely shaped window that allows for very interesting lighting effects.

Not the answer you're looking for? Browse other questions tagged sherlock film-location .

16
What is the deal with the assassins/bodyguards in “The Reichenbach Fall”?
14
What is with the list in the special episode of Sherlock?
3
Why was the corpse of the duplicate of the bride supposed to be with the original, in The Abominable Bride? Was it there?
3
Location of the scene with the river and waterfall: is the waterfall a joining of two streams?
9
Why did Mary Watson say what she said at the end of “The Six Thatchers”?
7
How did Sherlock find out who is the guilty one in “The Six Thatchers”?
8
In “The Six Thatchers”, why does Watson blame Sherlock rather than himself?
3
Can someone explain Lestrade's joke in “The Six Thatchers”?
2
In the Season 3 of Sherlock, what did that 'Elephant in the room' case mean?
2
Where does No. 6 go with his car in the title sequence?