Why does Negan keep saying he needs to shave?

In The Walking Dead Season 6 finale when Negan sees Abraham he says:

I gotta shave this shit.

Later in S07E04 he mentions it again when he is watching the interview tapes of the survivors after they first arrived at Alexandria.

And when he returns again to Alexandria in episodes 7 and 8 he actually does shave.

So what is the purpose of this line and why does he keep mentioning it? Is there any kind of explanation from Jeffrey Dean Morgan about this line?

He is clean shaven in the comics

In the comics Negan is clean shaven. 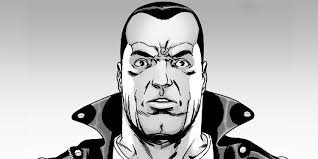 But Jeffrey Dean Morgan had to keep his beard

Jeffrey Dean Morgan was completing another role, The Good Wife which required him to have a beard, and was therefore unable to shave for the role of Negan.

"That wasn't in the comic book, that particular line, but Kirkman and Scott, they both wanted me to shave my beard, but I was in the middle of doing a job (The Good Wife) when I came down to Atlanta to shoot that scene. Literally in the middle of an episode so I couldn't just shave it. I think we'd shot the end of the episode." 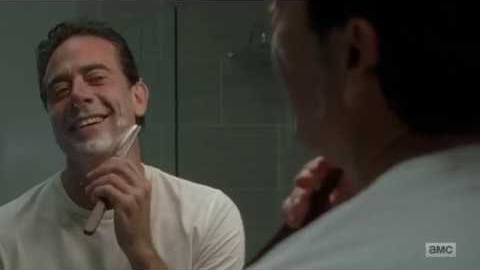 Not the answer you're looking for? Browse other questions tagged dialogue the-walking-dead .

9
Why did Veera keep saying “dan…dan…dan…danaka!” and what does it mean?
3
What does saying IKEA like this indicating?
7
Why does Eugene from the Walking Dead speak in this manner?
4
Why does Negan kill this character in TWD S07E08?
4
Why don't they just escape from Negan?
28
Why does Thor keep saying this to Banner?
12
What does Billy mean by saying Broke-dick dog?
5
Why did Rick decide to keep Negan alive?
4
Why does Col. Jessup say he will “keep taking cold showers until they elect some gal President”?