How educated is Bruce Wayne/Batman?

Bruce Wayne is a billionaire, trained by the League of Shadows, pretty smart too but how does he manage to fix a sophisticated piece of tech like the Bat's Auto-pilot on his own (I assume he did that on his own)?

Not to forget the supposedly "complex" program that Bruce Wayne wrote that would wipe Selina's record clean, something that's impossible to do.

This is my motivation to go out and ask, exactly how qualified is Bruce Wayne to successfully accomplish such a task?

Pardon my ignorance of the "comics universe", my reference being the Nolan-Bale trilogy.

While the DC Comics version of Bruce Wayne is highly educated, no mention of education was mentioned in Christopher Nolan's Batman trilogy. Furthermore, while Bruce Wayne in the comics held degrees in chemistry and physics[1], in a scene[2] from Batman Begins (after becoming Batman) it appears he has not had such education:

Lucius Fox: [Bruce Wayne is recovering after being poisoned by Scarecrow] I analyzed your blood, isolating the receptor compounds and the protein-based catalyst.
Bruce Wayne: Am I meant to understand any of that?

His degrees in the comics universe include (among many others) Computer Science, Engineering, Physics, and Mathematics[1], so based on those degrees he would be highly qualified to fix 'The Bat's auto-pilot and hack into national databases and erase Selina Kyle's record. It would not actually be impossible to hack into the government's computers and erase/modify records for Selina Kyle.

Whether his education in the in-comics universe exists in Nolan's trilogy is anyone's guess, but most computer hackers are self-taught and in obtaining that knowledge must learn quite a bit of programming, which, depending on how Lucius Fox designed 'The Bat', could have allowed him to easily fix the auto-pilot.

Another possibility is he simply used his near limitless funds to hire someone quietly to do it.

Creators Kane and Finger started the Batman series, and only addressed his background after about 6 months (from Batman - The Complete History: The Life and Times of the Dark Knight by Les Daniels: 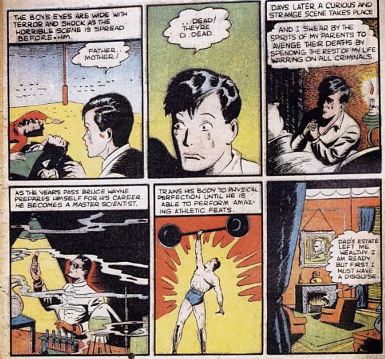 Later editions expanded the mythology. According to the DC Comics wiki, in the Earth-One series:

As Bruce became a teenager, he dedicated himself towards learning everything he could about police procedure. He decided to track down the city’s most famous private detective, Harvey Harris. Donning a bright red, yellow and green costume to conceal his identity, Bruce tracked Harris down, only to find a criminal waiting to ambush him. Bruce used a large advertising display piece to waylay the thug, saving Harvey's life. Harvey was so impressed with the teen's verve that he agreed to take him under his wing. Thinking the masked teenage boy looked as colorful as a robin redbreast in his costume, Harvey decided to call him Robin.

As Robin, Bruce spent several weeks training under Harvey's tutelage. Harris instructed him on the finer points of criminal detection, and trained him in gymnastics, and hand-to-hand combat. Working together, the two became inseparable and in the span of just a few years, they managed to deal a marked blow against the criminal underworld.

When it was time for Bruce to enter college, he parted company with Harvey and threw himself into his studies. He specialized not only in criminology, but in the sciences as well. After four intense years, he was nearly ready to fulfill his lifelong dream of becoming a law-enforcement agent.

Upon graduation however, Bruce began to re-evaluate his future. He recognized the fact that law enforcement agencies were often the victims of an endless bureaucracy that hampered them from meting out true justice. He could not in good conscious follow such an ineffective path.

But in the later series:

He spent his youth traveling the world, training himself to intellectual and physical perfection and learning a variety of crime-fighting skills, including chemistry, criminology, forensics, martial arts, gymnastics, disguise, and escape artistry.

At age 14, Bruce Wayne began his global sojourn, attending courses at Cambridge, the Sorbonne, and other European universities. However, he never stayed long and would often drop out after one semester. Beyond academia, Wayne successfully acquired various "practical" skills. While abroad, he studied and received training in multiple martial arts under various instructors and in different countries, man-hunting under Frenchman Henri Ducard, stealth and reconnaissance under the Japanese ninja Kirigi and other certified shinobi, hunting under the African Bushman (the Ghost Tribes of the Ten-Eyed Brotherhood, among others), traditional healing disciplines under Nepalese monks and even ventriloquism under skilled practitioners. His knowledge of so many varied disciplines has made Wayne an unconventional and unpredictable individual. At age 20, he attempted to join the FBI, but after learning about its regulations and conduct, Wayne deducted that he would never be able to completely oppose crime while working within the legal system.