Joy kept a bottle all through the drift. What was it?

When the Essex was on fire in In The Heart of the Sea, a stoppered bottle rolled in front of Joy who was moving stuff to boats.

Later, the bottle was seen when Joy took it out of his pocket to see it. He never opened it the whole way despite the fact that he was dying.

Is it whale oil or liquor or something else I don't know? What is the significance of him keeping it? 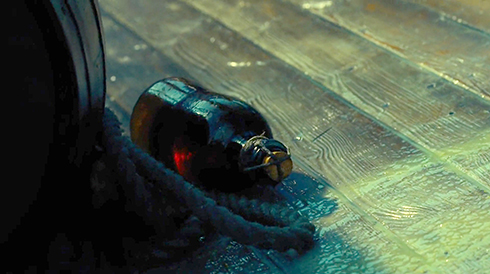 We're never told exactly what it is, but Joy is a recovering alcoholic and makes mention a few times about his abstinence. When they're on the island after being shipwrecked, Hemsworth's character asks him if he wanted it opened, and Joy declined but still clutched it to himself. This, to me, implied that as his days were running out, he'd probably begin drinking again to ease the pain.

Not the answer you're looking for? Browse other questions tagged plot-explanation in-the-heart-of-the-sea .

8
What was Interstellar's post-climax scene all about?
19
Why did Joy give Sadness the core memories?
4
Why did Joy Birch mention Keller's name at the hospital?
11
Importance of the white cloth kept by Kevin's therapist
3
What is the meaning of the nameless lady's words to Baroness Joy von Troken?
5
Was Fritz a Nazi all along?
3
Is there a known reason why the Darksaber was kept in the Jedi Temple?
0
How did the other Brainiac 5 know about the bottle?
0
Why did S I Tilak shoot through a bottle?