Is the set the set, or a set of the set?

I the TV show Jane the Virgin Jane plans to get married in her house. Unfortunately due to the curse on her grandmother's boyfriend the house is damaged and it can't be fixed in time for her wedding. Jane's father, Rogelio, who is the star of a telenovela has the telenovela crew construct a set that looks exactly like Jane's house. To reduce confusion I'm going to refer to this as "Rogelio's set," in contrast to the "real life set" that is used for normal shooting throughout the show.

This is where my question comes in. I would assume that the sets would have to be the real life sets for the shots where you can't tell it is a set because it wouldn't make sense to rebuild a second set for those shots. What I'm asking about are the wide angle shots where you can clearly tell that you are looking down on a set. So are Rogelio's sets, that we can see are clearly sets, the same as the real life sets? 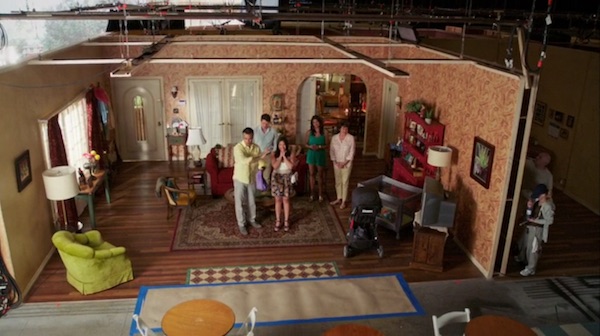 That picture is the only one I could find on the internet, but I think in the show they had another shot as well with the outdoor landscaping.

I don't know the actual answer and I don't know the show - but as no-one's come forward on this yet, I'm going to throw in some possibilities as to how they could do it, based on other shows' working practices.

They require one set they can use as exterior/interior - the 'answering the door/coming home' scenes. As you can see from the image below [from your link], this is very likely a location shot - even in the still there is far too much apparent depth in the background to be fake. 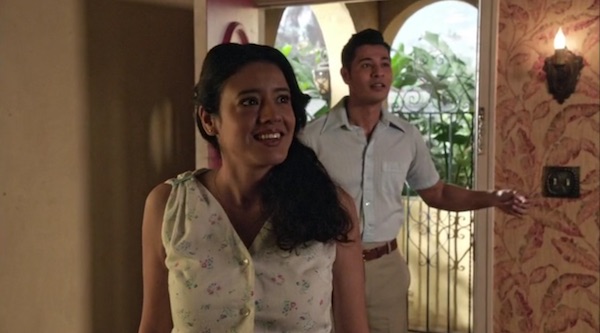 Houses in general are too small to film in comfortably, so unless they are really only going to be using it for a short time they tend to do the 'walk through the door' scene on location and the first cut is then to a built set in the studio, much larger than the actual house.

Whether or not the set has a 4th wall [other than for live audience shows] may depend on directorial/shooting style and/or budget.
Quite often one or more of the external walls is removable, so which 3 are in place depends on the shot.
If they don't have a 4th wall, then the establishing shot would by trope be 'follow them in on location so we can see the fireplace' [where our set wall doesn't exist]. Once the audience are comfortable there's a 4th wall, we never need to show them it again; if we do it will be in another wide from the door, so they never get chance to properly examine the difference in scale.

Then we come down to budget and time constraints.

If they need to 'damage' the set, or alter it considerably, they have a couple of choices.

There is nothing in the wide still of the set that would preclude it being the "real" set. I see no impediment to a 4th wall being replaced.
The carpet runner on the floor at the front could be covering anything, it's impossible to tell.
The coffee tables look a bit weird, as nominally that area would be full of crew not diners, but are easily removed.
Between them, the carpet and tables look like a bit of set dressing to keep the front of the shot looking interesting - or have reference to something in that scene; maybe the characters on the "fake" set sit there for a bit of dialog.

In short, it's impossible to tell from the scant evidence I have, but there's no reason it can't be the "real" set.

Not the answer you're looking for? Browse other questions tagged production jane-the-virgin .

17
What exactly does a director do in an animated feature?
13
How close is Masters of Sex to the actual events?
22
What happens if an actor dies or gets injured on set during filming?
2
Was there ever a TV comedy that showed you the other side of the TV?
7
What happens to complex movie set decorations?
21
Use of safewords in mainstream moviemaking
1
Is the Bachelorette scripted?
4
What kind of preparation is done on-set when an actor has to play a character in disguise?
3
Real or fake arcade machine in the Foot Clan scene?