Old animation movie with girl who has magic necklace or pendant that she could never take off, [closed]

What I know about this movie:

It has to have been released at most during 1982 but it's probably older. I know this for a fact because I am sure that I was six years old when I watched it and I know this because my whole first grade class was taken to the cinema. Also, we weren't taken to a regular cinema, it was a special show and that's why I believe this movie is older, probably from the 70s or even 60s, or who knows, older than that?

I remember a girl who was evil, but later it was revealed that she was not evil per se, but that she was following orders from someone else. The reason that the girl was following those orders is that she had a magic necklace or pendant that she could never take off, she believed she'd die if she took if off, and the other person threatened her with taking her pendant off all the time. When someone else is about to die, the girl selfless takes the pendant off and puts it on the other person, thinking she would die for doing this, and is surprised when that doesn't happen.

I know it was a film, it was not a series.

I remember the colors were very bright, with a lot of blue, pink, violet, colored clouds, etc.

The drawing was very stylized, that's why I think it was probably Japanese anime, but I'm not sure, it could have been produced in any country.

I remember a blue or green dog or cat but perhaps I'm mixing this with another movie.

I know all I said is very vague and I apologize for not being able to provide more accurate information about this movie, but thank you for reading, and I'd appreciate any clue you could provide into solving this personal mystery :)

So, I think it might be The Great Adventure of Horus, Prince of the Sun.

In the synopsis of the movie, it states

Together they defeat and destroy Grunwald. Hilda, who had given her magical "Medal of Life" to aid Horus, finds that she is still alive without it, and rejoins Horus and the villagers. 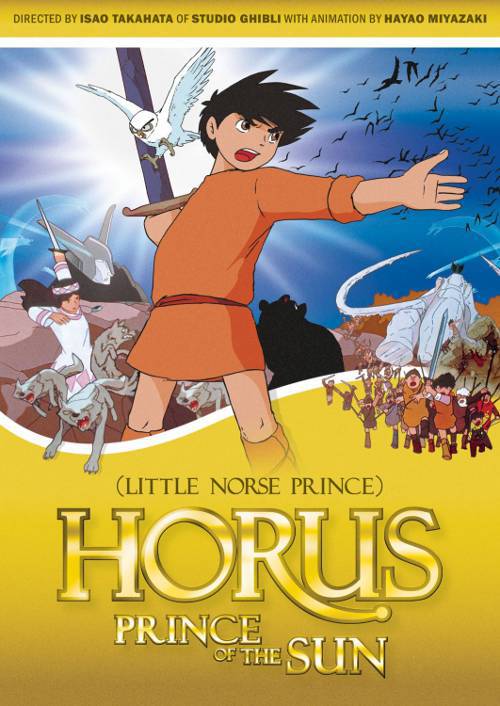 I found it by looking through this list and looking at all of the movies made in Japan.

Not the answer you're looking for? Browse other questions tagged identify-this-movie animation .