On the season finale of Vikings this new character is introduced: 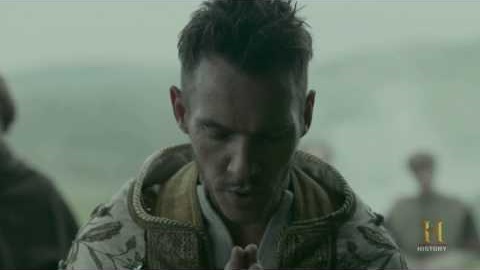 And so far Vikings has been as accurate as a series can be about an actual historical time and still be a show. But I'm afraid that the Tale of Ragnar's sons has ended, and so, who is this new character? He appears to be an English monk, but he has a sword of a Viking, as shown when he's having sex with that lady and the end of the episode. Who is this?

Well, this actor is Jonathan Rhys-Meyers who is playing a medieval bishop named Heahmund.

From this interview with Hirst

"He's a man of Wessex, and he's gonna come in as a worthy opponent to Ivar," Hirst promises, comparing the character to Richard III. "His whole life is about deeply passionate commitments. He's a wild card who happens to be [played by] Jonathan Rhys Meyers, who is himself kind of a wild card!"

The creator also added that Rhys-Meyers' character as Headmund will probably be against Ivar and it seems like however, their encounter will not happen yet in the next season; however, his character will appear in the episode of season four, Ace Showbiz reported. The film creator added that he is really perfect for this crazy and religious kind of character.

Not the answer you're looking for? Browse other questions tagged character vikings .

8
Why was a female selected for M's character in James Bond?
1
Who is the third person in the opening scene of "Dallas Buyers Club"?
2
Why was Lagertha made mother of Bjorn?
20
What is the connection between Ragnar from Vikings and Ragnar from The Last Kingdom?
14
Is the 8th Doctor really half-human on his mother's side?
5
How was the prosperous Kattegat not taken over in Vikings?
4
Was there a purpose to Margaret Allison Hart being introduced in Season 7?
26
What was the name of the Hun Leader in Disney's Mulan?
1
Is Ragnar's posture in "Vikings" due to a character injury or his actor recovering from one?
4
Were the Knights of Ren always working for THIS character?