The first time I saw a The Hours poster I didn't recognize Nicole Kidman's face.

I thought her face changes according to the movie plot. Then I saw the movie and she looks really different during the whole movie. There is nothing related to the face I FOUND. 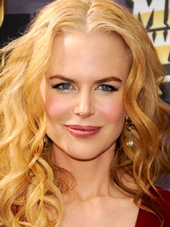 The reasons are, according to Stephen Holden,

As to how they made her look so different, from here:

Talk about a tough job. Makeup artists had to transform Nicole Kidman into the homely novelist Virginia Woolf for "The Hours," a task that took three hours a day. The key was a large prosthetic nose that rendered Kidman virtually unrecognizable.

Not the answer you're looking for? Browse other questions tagged the-hours .