In a well edited movie, there are no scenes that don't either move the story ahead or explain something not otherwise known about the protagonist or his/her story.

In John Wick (2014), there is a specific scene I would like a better explanation for, as to why it was left in the movie.

What does the cop scene which happens after the end of the first assassination attempt at Wick's house provide for the viewers? 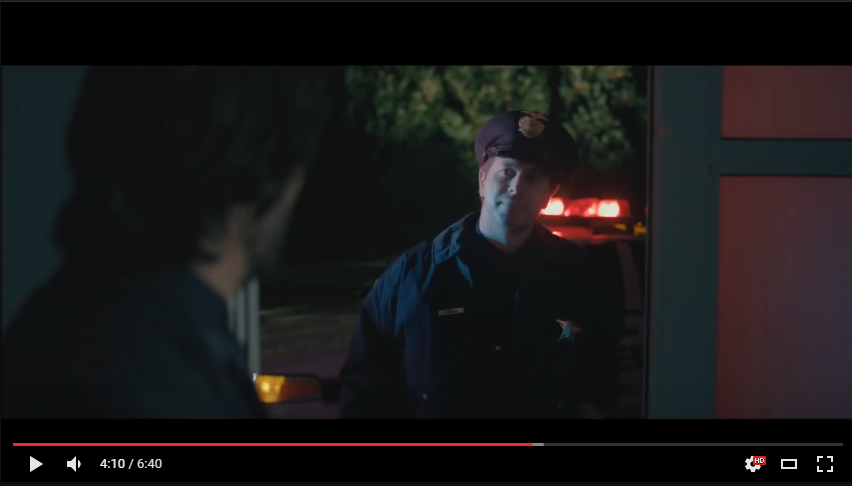 As an explanation of the scene, shortly after Iosef reports back to his father about the car he stole, and was chastised, his father sends an assassin squad after Wick, to Wick's home. We see the squad taken care of one by one, by John Wick, in a fashion which reinforces the father's exposition of John as "baba yaga," or the boogy man. After the final assassin is killed in Wick's front hall, the door bell rings. Wick looks up and sees (as we see, from his point of view), a silhouette of what looks like a man in a bulky jacket and hat, back lit by blue and red flashing lights. Perhaps a Police Officer.

John Wick answers the door, gun hidden behind his back to find that, yes, it is an officer standing there. The two of them greet each other, cordially, on a first-name basis. During the friendly dialog, the officer asks Wick if he's "working again" while glancing at the dead man over Wick's shoulder. Wick replies, "no, just sortin' some stuff out". To which the officer finally replies "ah well... I'll leave you be then" and turns and returns to his squad car.

This scene just proves even further the amount of respect (and a little fear) that the members of the community have for John Wick.

Remember the scene where he drives his mustang around the airplane hangar? The guard at the gate just allows him to drive around in there whenever he pleases.

It is basically an unspoken rule that the police know who he is and what his previous profession was and to not interfere. This scene just reiterates the respect that everyone has for him.

steelersquirrel's answer is spot on already, and this is partly retreading it but:

A police officer sees a man armed with a pistol, spattered with blood, and sees a corpse in the hallway. Yet the cop and John simply exchange pleasantries, call each other by their first names, and... nothing happens. How does that not inform the viewer about the movie's world and John Wick the character?

But imagine for a minute that the cop scene wasn't there: The audience would perhaps wonder (consciously or unconsciously) how the movie's world works. I mean, the house is shot up, and there are a dozen dead bodies lying around - shouldn't someone notice something? Well, yes, they should. And they do. And they call the cops. But this is John Wick we're talking about, so the rules simply don't apply.

Still, having the cop show up at all demonstrates that this is sort-of the real world still, and not, say, "purge night" where anything goes. The movie tips its hat to realism in order to forego it for the remainder. For the rest of the movie, John runs around tearing up nightclubs, churches, city streets, and dockyards, but cops are nowhere to be seen. That single cop at John's door basically represents all of law enforcement in the movie, and he just says to John (and the audience) that they're not going to interfere - or even bat an eye.

And John, for his part, doesn't hurt cops or civilians - not even if they get in the way. The build-up to the scene in question makes you think John's about to kill the cop (he hides the gun behind his back, sneaks toward the door), but again: Nothing happens. There's no "I don't kill cops" creed or code of honor or anything that trite; it's just plain irrelevant.

Why or how this all came to be is a different matter, but also unimportant. In fact, it works much better for John's character that it isn't explained. He's just baba yaga, and you can't reason about fairytales.

Screen Junkies: I've always been curious about [the cop scene]. Is he an assassin inside the police force? Is that just a friend of [John's] who is on the inside?

Chad Stahelski: If you notice, in either of the John Wick movies; they don't kill innocents, they don't kill cops, it's completely hidden within their own business. So as long as they maintain that, the cops are cool. [...] There aren't any dirty cops. It's just, they're in the know, we're in the know, it's good. The cops have their own world [which] we want to keep separate.

Dave Leitch: Yeah, [the cops] have their own underworld as well, and he would be part of that.

Chad Stahelski: Jimmy would be part of it, but there is a mutual respect there.
-HONEST REACTIONS: John Wick Directors React to The Honest Trailer! (16:15)

In addition to the excellent answers already posted, I have to say that this is also a great example of comic relief (as comic relief goes, this is very dry, and very dark, but that just makes it all the more funny for people with that kind of sense of humor).

It's reminiscent of the scene in a well known cartoon where a wolf and a sheep dog punch the same clock as they start their day, one guarding the sheep, the other attempting to steal and eat them. The completely unexpected casualness of the interaction is (part of) what's funny about it.

3
Is law enforcement aware of the Continental?
7
Why does public show no reaction to killings in John Wick 3?

1
Why did Luke not let the man on the street enter into the car in 'Vanishing on 7th Street'?
14
What are the coins John Wick is using?
8
Do I need to watch the first John Wick to understand John Wick 2?
11
John Wick asking for laundry
19
How does Iosef Tarasov not know John Wick?
18
Is John Wick ex-military?
4
Is Jason Isaacs in John Wick?
1
Why is John Wick gifted with a new car?
3
What did the writers mean by this detail in one scene of one episode of "Alfred Hitchcock Presents" from 1957?