Was John Bender actually the hero in The Breakfast Club?

So I am curious John Bender is portrayed as a burn-out, soon-to-be on welfare, your future armed robber, killer, burglar, and alcoholic at first in The Breakfast Club. However, as the movie progresses we notice that he seems to have some compassion and might even care more about others than himself at the end. Maybe he was actually the hero. I don't know, but I think he was. Was he?

[Judd] Nelson was the Bogart of his era. The anti-hero hero.

In a sense, they are all "heroes," in that they all go through an ordeal and emerge from it stronger, more fully realized people. Judd Nelson's John Bender, however, does seem to more strongly define the characteristics of the hero's journey.

He initiates the call to adventure with his irreverent behavior, prompting the group to first react to—and interact with—each other. Later, he is responsible for the group's experience of crossing the threshold, in which they venture out of the library in search of Bender's bag of weed. Bender is also an integral part of the Reward step, also known as Seizing the Sword: here, he makes out with Claire (Molly Ringwald) and receives from her a diamond earring stud—which he puts in his ear.

Again, they're all heroic in individual ways, but Bender's fulfillment of classic hero stages is more pronounced and definitive than that of his schoolmates. The iconic final shot of the film, which freeze-frames on Bender punching his fist defiantly, triumphantly skyward, seems to underscore this. 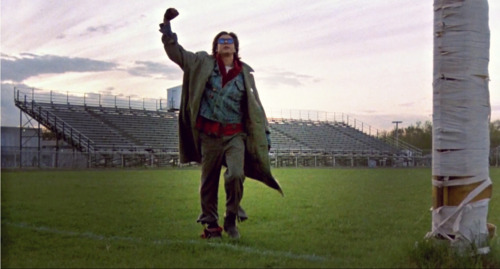 Not the answer you're looking for? Browse other questions tagged character analysis breakfast-club .

12
Was Edmond Dantès Actually a Traitor?
56
Why was Being John Malkovich based around John Malkovich?
20
Was Archie Hicox's accent actually strange?
6
Was it actually an average day?
6
What was John Doe's backstory in the eponymous TV series?
6
Why did Claire give John the earring?
5
Why was John Locke given choice to select an object by Richard in Lost S04E11?
21
Meaning of the pink soap bar in Fight Club
11
Why did some people feel Lonely Are the Brave was "brutal" and "sadistic"?
28
Why does the devil go by the name John Milton?