A few years ago I saw a film (or at least I think I did). My memories are terribly vague but perhaps someone can help me.

The film was set in the modern era. The protagonist is a woman with a young child. She is trapped in some mental facsimile of her real life, as the result of a near-fatal accident. Ostensibly the story is standard drama about the events of her life, growing old, et cetera. Towards the end it becomes increasingly obvious that none of this is "real", and the film ends with her (now an old woman in the fantasy) accepting her fate.

The accident was almost certainly a car crash, brought about in part by the protagonist being distracted by her child in the back seat. The details of the fantasy are it was either constructed by her subconscious during her last few seconds of life, or the crash rendered her into a coma and the rest of her life was a dream. Throughout the film, clues the real world filter into the fantasy. For example sentences said immediately before the accident or at her bedside occur in the fantasy but in different contexts. Towards the end she becomes more aware of these.

It sounds similar to The 12 Days of Christine, an episode of Inside Number 9.

The episode tells the story of Christine, a young woman living in a small flat, over 12 years in her life, focussing on key days and life events in that time.

However (and beware of spoilers):

She says that she feels as if her life is flashing before her eyes, and then realises what is happening. Christine sits in a car wreck as emergency services attempt to free her. The Stranger is explaining to the police that he stepped into the road, causing the crash, and, though he could free Jack, he could not reach Christine. At the dinner table, Jack enters dressed as a Nativity angel. Marion says it is time for Christine to move on. Christine says a final goodbye.

I think you are looking for the movie If I Stay starring Chloë Grace Moretz. 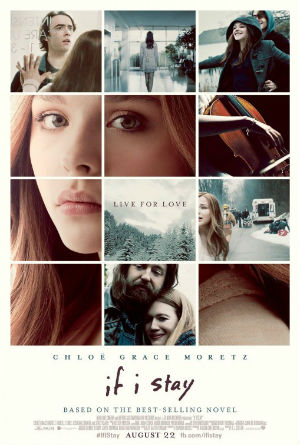 Here is the plot from IMDB:

Life changes in an instant for young Mia Hall after a car accident puts her in a coma. During an out-of-body experience, she must decide whether to wake up and live a life far different than she had imagined. The choice is hers if she can go on.

The story flashes back to current time with the family driving to the grandparents' farm when their car collides with an oncoming truck. Mia appears to have an out-of-body experience where she finds herself barefoot and sees her body lying on the road while paramedics are trying to help her and her family. Mia tries to ask a paramedic what is happening, but realizes that no one can see or hear her. Mia, now in the hospital, panics as she does not know the current status of any of her family members when they take her in for surgery. A sympathetic nurse (Aisha Hinds) tells Mia—her physical body, not Mia's spirit, which apparently she cannot see either—that it is up to her whether or not she wants to stay.

This sounds a lot like a road safety ad that has been airing here in Ireland for the last couple of years. The protagonist starts as an old woman and her story unfolds in reverse until it reaches the car crash in which we learn that she lost her child, caused by her being distracted by the child.

It's called RSA - Don't Look Back

I'll suggest it since you say that your memory is vague, plus I see from your profile that you're in Dublin so you never know!

This sounds like Danika from 2006. This is from the Wikipedia page on the movie's plot

Near the end of the film, the audience learns that Danika was in a car accident years earlier while driving her young children home and she makes a side visit to see Randy. The accident occurred immediately after Danika found out he was having an extramarital affair with the children's nanny in a motel shower. Did her husband's extramarital affair cause Danika to crash? Or had she had a psychological break before learning of her husband's tryst?