Meaning of the green eye palette in Amelie 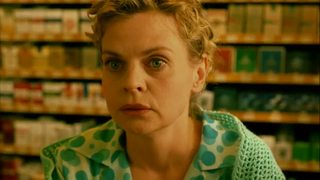 I have that backbone feeling that there is a pattern I can't get a grasp of, and couldn't find any explanation on the internet. What's the story behind it? Did the director say something about that?

This answer from Quora explains it very well:

Green is used commonly throughout Amelie and mainly because green symbolizes hope and nature in many cultures which often brings comfort to the viewer’s eyes. Green is used in the film to create vitality and to contrast with the warmer, more saturated colors mainly seen in the mis en scene.

The combination of red and green can be seen when young Amélie as she is setting the red fish free in the river with her mother. The surrounding green creates a sense of grace and vitality representing nature next to the strong contrasting red which as mentioned earlier possibly symbolizes Amélie’s childhood of which she’s forced to take a step back from.

So, it's possible that the director might be telling something about Amélie’s childhood by using a combination of the colors green and red.

Not the answer you're looking for? Browse other questions tagged analysis amelie .