Why is Jon Snow's hair black?

Many people assume Jon Snow from Game of Thrones is a Targaryen, but Targaryens have white hair.

Are there any other references mentioned in the book about this?

Alert if there are any spoilers.

North people tend to have dark hair, so was Lyanna Stark. 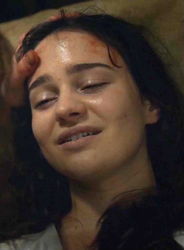 References from the books (thanks Chanandler Bong).

21
Why did Melisandre ask Jon Snow if he's a virgin?
42
How was Jon Snow able to kill the White Walker in S05E08?
3
Is there any evidence to clarify Jon Snow's fate?
13
Does what happened to Jon Snow make him immune to White Walkers?
28
Why doesn't Shireen Baratheon have black hair?
2
Who else knows the truth about Jon Snow's parentage?
17
Significance of Jon Snow's real name
1
Who is Aegon Targaryen?