I think I saw something like the last 1/2 or 2/3 of the movie, but I didn't see the opening scenes. It was in English, probably produced in the USA, and in color. I saw it on TV, somewhere around the mid-1990s, but I have no idea how old it was at the time. It had several funny moments, but I wouldn't call it "pure comedy." Family-friendly; no sexual themes or violence or foul language (not in the part I saw, anyway). In other words, if it was produced after the MPAA's ratings system went into effect in 1968, it may well have been rated G. (But for all I know, it might be older than that.)

Here's what I remember about characters and plot:

There have been a great number of films about Lincoln; I have no idea which one this was. Any suggestions?

Sounds like the 70s TV movie The Great Man's Whiskers. From an online synopsis:

In this comedy-drama, a ten-year-old girl [Elizabeth] writes a letter to President Abraham Lincoln urging him to grow a beard and he temporarily abandons his inaugural tour to pay her a visit. Originally filmed in 1969, this made-for-TV movie remained unreleased until NBC aired it in 1974. The Great Man's Whiskers was inspired by the story of Grace Bedell, who wrote Lincoln just before his election to the presidency in 1860. Dennis Weaver appears as Lincoln primarily in the final quarter of the film.

The above link also contains some screen caps; here's one of them with the girl and Lincoln: 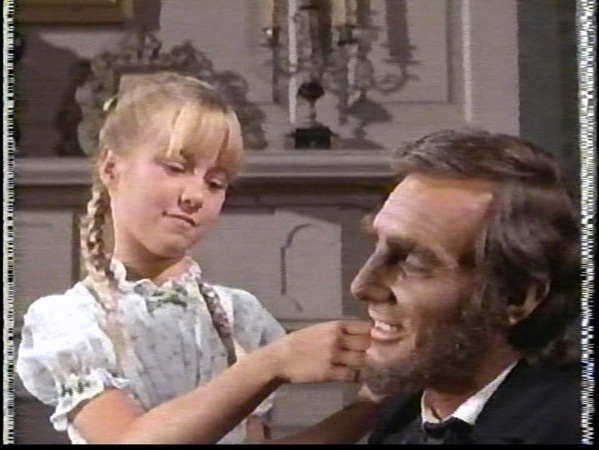