Is any of the footage in Patriots Day real?

The film Patriots Day (2016) is filmed in a very realistic, and according to some of those that actually experienced the events, accurate and respectful manner.

There are a number of shots from security cameras and news reports in the film. Obviously not all of this can be real footage, since some of it shows the actors, but is any of this film taken from actual footage of the Boston Marathon bombings?

Edit: I'm not referring to the any of the footage at the end of the movie at the Red Sox game or interviews with the victims.

Berg originally thought of shooting Patriots Day at some of the actual locations where the bombings and subsequent manhunt took place, but he found himself facing stiff local resistance. Watertown and the University of Massachusetts at Dartmouth (where Dzhokhar Tsarnaev was a freshman) denied filming requests. Plans to shoot background footage at the 2016 marathon also raised eyebrows. News accounts quoted locals complaining that turning the marathon into a film set was in "poor taste" and the "rankest form of opportunism," while others suggested that Wahlberg donate his salary to the victims.

In the end, the production did shoot some footage at the 2016 marathon, but filmmakers worked hard to keep an open dialogue with the community.

The actual explosion in the movie is a recreation.

The most violent scenes — the bombing and shootout with the brothers in Watertown (Tamerlan Tsarnaev was killed, and Dzhokhar was captured and sentenced to death in April) — were filmed far from Back Bay at a former Navy airfield 20 miles away in South Weymouth.

"It was intense because these were extras who were from Boston, many of whom were there [at the bombing]," recalls Berg. "Every morning we would all get together, all the extras and the crew; they, too, were emotional about what we were filming, the sequences right after the blast. We made it clear that if somebody was uncomfortable, if somebody was emotional or things got to be too much, there were plenty of people on the crew that they could reach out to, and we would deal with that and take care of them." 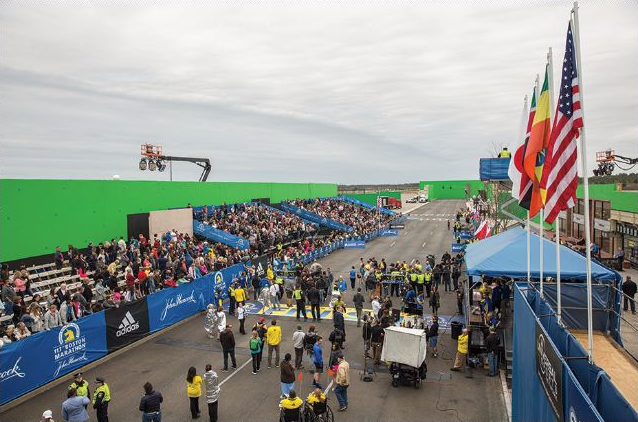 Not the answer you're looking for? Browse other questions tagged film-techniques patriots-day .

10
Actors acting the real actors inside a movie?
23
Are real guns used in movies?
6
How did they shoot/record the One Day More scene?
16
Is that a real baby?
16
Does Narcos use real corpses?
1
Do they show real social networking accounts in the movie?
10
Was the horse shot at the beginning of The Revenant real?
0
Why don't the Boston investigators have any ready-made place to investigate the marathon bombings?
3
Why would sunken footage be destroyed if it hadn't been shot on film?
7
Why different footage was used for "Garcon, coffee" callback