Essentially I'm trying to determine the earliest depiction of a chimpanzee as a Mad Scientist in film or television. Mojo Jojo was a notorious and powerful mad scientist Chimpanzee from Powerpuff Girls.

I can't remember if any of the chimps on Lancelot Link, Secret Chimp were mad scientists. (Dr. Strangemind, for instance.)

Regular scientist chimps would not qualify, but Bonobos are close enough genetically to be included under the "chimp" umbrella. I'll also accept orangutans per their proud cinematic tradition.

As you increase your scope to include orangutans, with great trepidation I propose Dr Zaius from the original Planet of the Apes 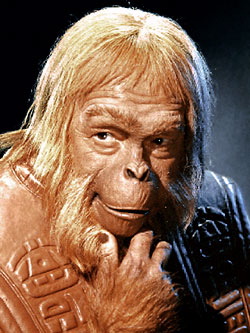 Zaius serves a dual role in Ape society, as Minister of Science in charge of advancing ape knowledge, and also as Chief Defender of the Faith. In the latter role, he has access to ancient scrolls and other information not given to the ape masses. Zaius knows the true origins of the ape society, how humanity fell as the dominant species, and the reasons why the Forbidden Zone is so regarded, and he blames human nature for it all. Zaius seems to prefer an imperfect, ignorant ape culture that keeps humans in check, to the open, scientific, human-curious one posed by Cornelius and Zira's generation (this is due to his fear of a war of self-destruction).

Hopefully as Minister of Science, he meets your criteria of scientist. He is an antagonist in the film, whose methods cause harm to his own species (quite mad). Lastly, he is an orangutan (not a chimp or a bonobo).

Not the answer you're looking for? Browse other questions tagged character first-appearance .