Who is the Doctor who broke the promise?

When Clara jumps into the Doctor's timeline, the Doctor follows her to pull her out. While there, they witness "The Doctor who broke the promise", the promise being the name Doctor.

Who is this Doctor, The Doctor who broke the promise?

Is it one of the actors from the 60's series?
The Doctor who fought in the time war?
Someone else?

It was the War Doctor. 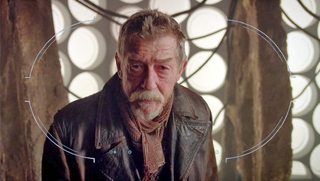 He broke the promise that made him the Doctor, by taking part in the Time War.

In the online minisode Night of the Doctor, when the Eighth Doctor (Paul McGann) regenerates into this new body, he leaves behind the name of Doctor and becomes instead a Warrior, in order to play his part in the Time War he's been avoiding for so long:

OHILA: Then she was wiser than you. She understood there was no escaping the Time War. You are a part of this, Doctor, whether you like it or not.
[...]
DOCTOR: Warrior.
OHILA: Warrior?
DOCTOR: I don't suppose there's a need for a doctor any more. Make me a warrior now.
[...]
(The Doctor drinks the elixir and staggers, dropping the chalice. Regeneration energy starts to surge through his body. He doubles over. White out.)
OHILA: Is it done?
(A figure takes Cass's baldric and puts it on.)
WARRIOR: Doctor no more.
(We are shown the reflection of a young John Hurt.)

And in the 50th anniversary special The Day of the Doctor, the promise is discussed explicitly:

CLARA: We've got enough warriors. Any old idiot can be a hero.
DOCTOR: Then what do I do?
CLARA: What you've always done. Be a doctor. You told me the name you chose was a promise. What was the promise?
(The fighting seems to have stopped on Gallifrey.)
DOCTOR 10: Never cruel or cowardly.
WARRIOR: Never give up, never give in.

The Doctor referred to was the War Doctor (the 9th regeneration, played by John Hurt)

The promise referred to was the "Never cruel or cowardly. Never give up, never give in."

SFF question regarding the promise specifically.