Why does the Underworld film series avoid female Lycans?

In the Underworld film series we see so many Lycans and Vampires, but not a single female Lycan. We even got to know about rare pure blood vampires born from mating vampires. So why can't Lycans achieve or try it? Why did they avoid showing any female Lycans in the films? Is there some out of universe explanation for it or is it explained in some expanded canon?

Female lycans can and do exist, although we have only seen a few of them. Any human, male or female, bit by a lycan will either die or become a lycan themselves.

I am not aware of a statement from the film creators about the lack of female lycans in the first four films. For Underworld: Blood Wars, however, we have this quote from Kate Beckinsale in a Q&A about Blood Wars on Facebook (7 minutes into the video):

Question: Will there be any female lycans?
Kate Beckinsale: Well, here’s the thing: the advantage of having a female director is that she was quite concerned about the whole fact that the female lycans always seemed to be at home making dinner and not actually on screen. So yes, there are female lycans.

Blood Wars is the first time that the franchise has had a female director.

I saw at least two female lycans in Blood Wars, both visible in this screenshot from the third trailer: 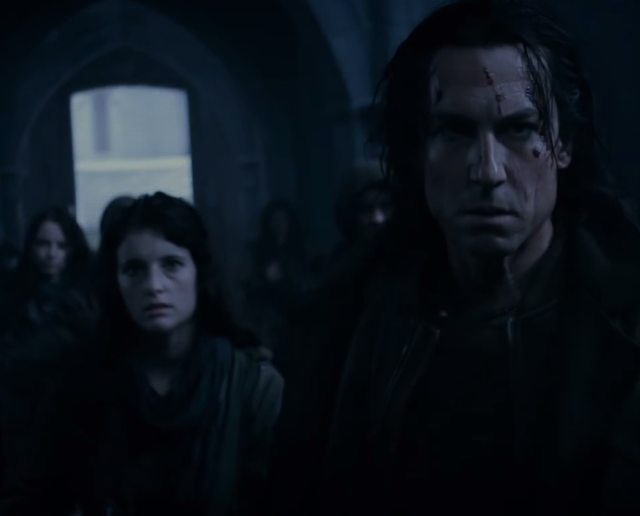 Still, two women and dozens of men is quite a skewed ratio. To explain this, we need to consider the history of the lycans.

Lucian was the first lycan. For the first 200 years of his life, all lycans lived in captivity in Castle Corvinus. They served as daylight guardians for the vampires, and we also saw them performing construction work. Viktor forced Lucian and his progeny to feed on humans in order to create more lycans. As such, the gender distribution of the lycans was entirely up to Viktor. Given that their duties mainly required physical strength, Viktor may have preferred to turn only males.

It's possible that there were female lycans doing other tasks around the castle while the men were doing construction work and guard duty, but we have no evidence of this in the film or novelization of Rise of the Lycans.

It's also possible that Viktor avoided creating female lycans because he wanted to avoid the possibility of the lycans interbreeding, but again, there is no proof of this either way.

After the lycans escaped Castle Corvinus, they were in a constant state of war with the vampires. Female soldiers have historically been rare, so it appears that either Lucian's army preferred to turn mainly men to join their ranks, or few women agreed to join them. Although the lycans had at least one scientist, nearly all of the lycans that we've seen in the films are warriors.

There are multiple Werewolf and Lycan women. Lucian's mother, a background one in Underworld, a few random villagers in 1202 AD when Viktor finally caught William, one or two when werewolves attacked the caravan in Rise and a named Lycan female in Blood Wars.

Keep in mind that being bit by a Lycan or Vampire is very dangerous and only a few very strong survive. Since the imperative in this world is War, Lycans tend to target the strongest soldier types. They also somewhat see being Lycan as a bit close to slavery and being animals, so they don't turn people for fun. When Werewolves and Lycans were still under Vampire slavery, the Vampires only wanted slaves and guard dogs and also chose the strongest. Raze for example, was prized as he, a mere human, could fight off werewolves with his bare hands. As a Lycan he became Lucian's lieutenant almost immediately.

I am sure there were as many females as males in the days of the William Werewolves and they no doubt contributed to breeding a massive population of them. If you recall, in the 3rd film, there was a seemingly endless cavern of lycans.

However, it would not have been practical to have females in Viktor's slave ranks. Female lycans likely go through heat seasons that would be inconvenient on multiple levels.

And let's not forget that mating equals more lycans, and that was not Viktor's endgame. So the solution? No females.

Females is in the tragic history of the second generation lycans were nonexistent, and what's even more tragic? Their strategic absence rendered all Lucien Lycans incapable of establishing a thriving society.

Not the answer you're looking for? Browse other questions tagged underworld underworld-awakening underworld-evolution .

7
Why did the truck driver shoot Selene?
9
Best order to watch the Underworld movie series
6
Why does the Underworld team release their movies exactly with 3 years gaps?
5
Why does Viktor say that the sons of the Corvinus clan is a ridiculous legend?
3
Why don't the new recruits show any facial expression when Varga attacks them?
4
Why did the werewolves start shooting at the vampires in public?