How did Adebisi make his hat hang on his head?

In the TV show Oz, Simon Adebisi is very often shown with a hat hanging on the top of his head. It looks like it will almost fall. 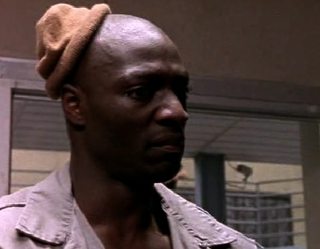 I remember it being discussed sometimes in the show, but can't recall exactly what they said about it.

Is this explained? Maybe there is a "behind-the-scenes" explanation by actors?

There is an interview in Men's Fitness where the actor, Adewale Akinnuoye-Agbaje explains how the hat stayed on his head:

But the weirdest thing about Adebisi was how he wore his trademark knit hat. The thing stayed perched on the corner of his head and seemed to never move. Anyone who ever watched the show had to wonder how he kept it up there. Turns out, there wasn’t much of a secret to be revealed.

I just put it on my head and it stays there, he says. People think it’s Velcro or whatever. All it is is my bald head. You just stick it on the corner. I could do a backflip and that baby wouldn’t move.

Just another reason why Adebisi was the most badass character on Oz. He defied the laws of physics.

I'm bald too and have insight on this issue because I tried to do it with multiple beanies (I really like OZ).

The secret is having a beanie that's made from a material that's a tiny bit rubbery, I had one from a sports store that felt like cotton but was stretchy and a bit rubbery feel, I rolled it up like Adebisi and it stuck on a clear shaven scalp like glue.

Not the answer you're looking for? Browse other questions tagged props oz .

11
In films how do they make spider web?
4
How did Rizzoli & Isles get the weight gain/loss "before" pictures?
7
Did Seinfeld ever use his computer?
12
How did the original lightsaber prop work?