Were the 1934 St Louis Cardinals Team the Inspiration for Daffy Duck?

Now we know that this relates to the 1934 World Series. The St. Louis Cardinals had two players, Dizzy and Daffy Dean. They also had a team member Ducky Medwick.

My question is: Were the 1934 St Louis Cardinals Team the Inspiration for Daffy Duck?

It would appear not.

The name seems to have originated by his antics when audience saw him (before he had an official name) in the short Porky's Duck Hunt.

Daffy first appeared in Porky's Duck Hunt, released on April 17, 1937. The cartoon was directed by Tex Avery and animated by Bob Clampett. Porky's Duck Hunt is a standard hunter/prey pairing for which Leon Schlesinger's studio was famous, but Daffy (barely more than an unnamed bit player in this short) was something new to moviegoers: an assertive, completely unrestrained, combative protagonist. Clampett later recalled:

"At that time, audiences weren't accustomed to seeing a cartoon character do these things. And so, when it hit the theaters it was an explosion. People would leave the theaters talking about this daffy duck." 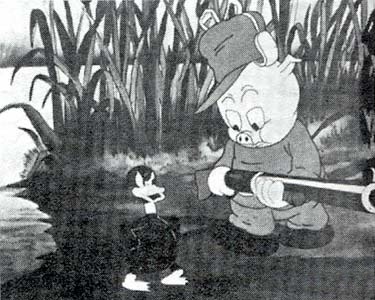 Not the answer you're looking for? Browse other questions tagged origin looney-tunes .

2
Supernatural Episode inspiration for Once Upon a Time