Why does Negan kill this character in TWD S07E08?

Earlier in the episode, we see Spencer return from a supply run and receive some commendation for it by one of Negan's men.

You look like shit, which means you fought for this. You did your jobs. You get it, and I like that. Negan likes that.

You know, I'm thinking, Spencer. I'm thinking how Rick threatened to kill me, how he clearly hates my guts. But he is out there right now, gathering shit for me to make sure I don't hurt any of the fine people that live here. He is swallowing his hate and getting [Chuckling] shit done. That takes guts. And then there's you The guy who waited for Rick to be gone so he could sneak over and talk to me to get me to do his dirty work, so he could take Rick's place. So I got to ask -- if you wanna take over, why not just kill Rick yourself and just take over? -- You know what I'm thinking? 'Cause I have a guess. [Whispering] It's because you got no guts. [Knife unsheathes] How embarrassing. There they are. They were inside you the whole time. You did have guts.

Its no secret that no-one at Alexandria or anywhere else loves Negan (including Spencer); except maybe the Saviours. In a world where humans/communities are constantly at each other's throats for supplies, superiority or other needs at some point or another, it's hard for me to understand why Spencer's hatred for Rick (given the death's in Spencer's family) is justifiable enough a reason to kill Spencer. Gregory at Hilltop is equally a coward while being in charge. So killing Spencer instead of putting him in command, just to humiliate Rick further doesn't sit well with me. The mere suggestion of it by Spencer would in my opinion take guts, as it definitely didn't seem as if Spencer meant Negan should kill Rick; unless it was his over confidence that brought about his death.

I think this scene is explained better in the comics than the show. Negan is trying to build a sort of relationship with Rick and show him that while he is a tyrant, he is reasonable to those who learn to follow his rules. Rick is a strong leader and Negan sees that and knows that having Rick under his thumb would be incredibly valuable to him. Whereas a person like Spencer sneaks around trying to get others to do his own dirty work.

As Negan explains in the comic, he respects that Rick is swallowing his pride and hatred for Negan and is out doing what it takes to protect his people. 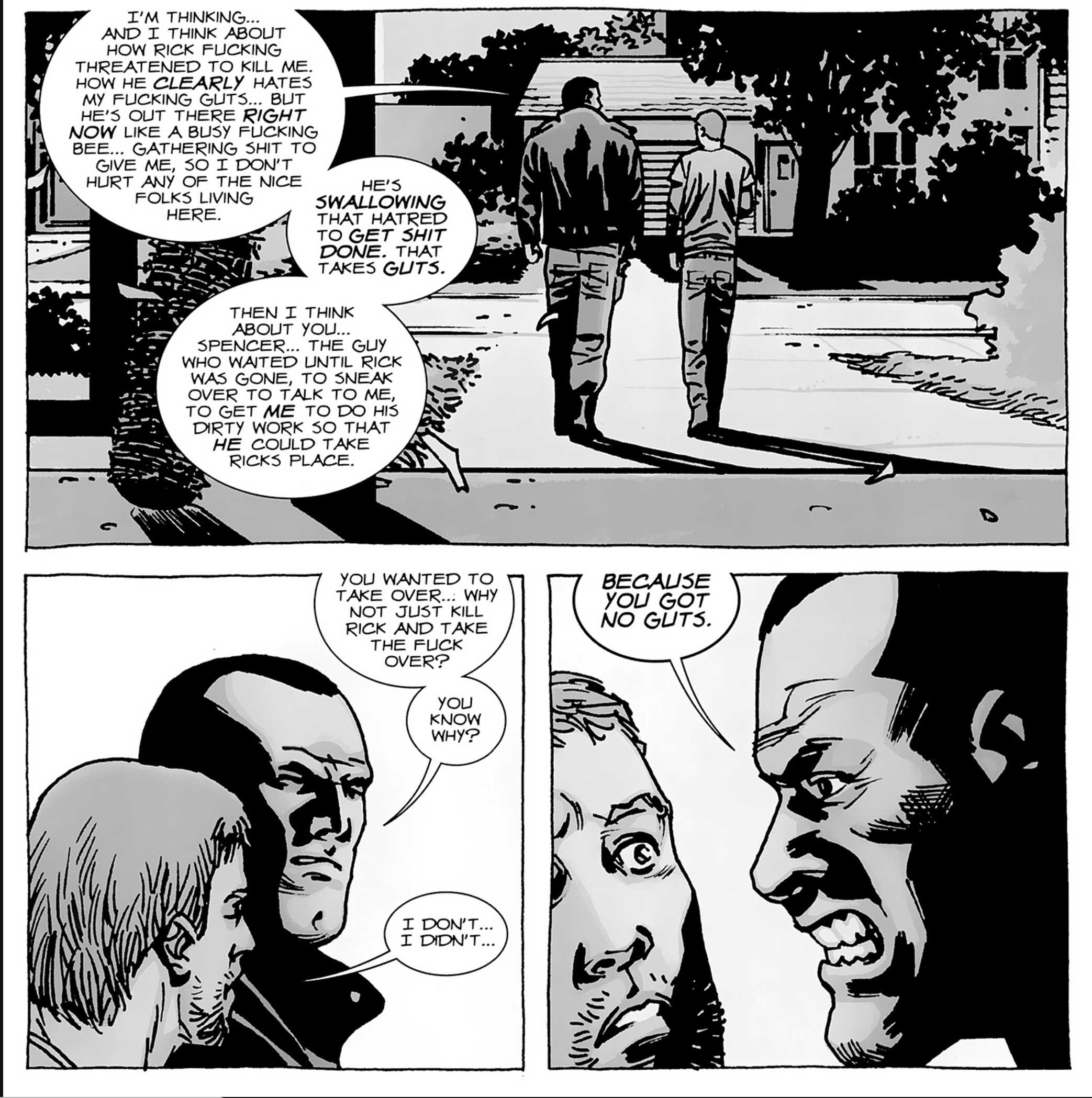 He also later explains to Rick that while his methods are screwed up, he is trying to show him that he's willing to be reasonable. 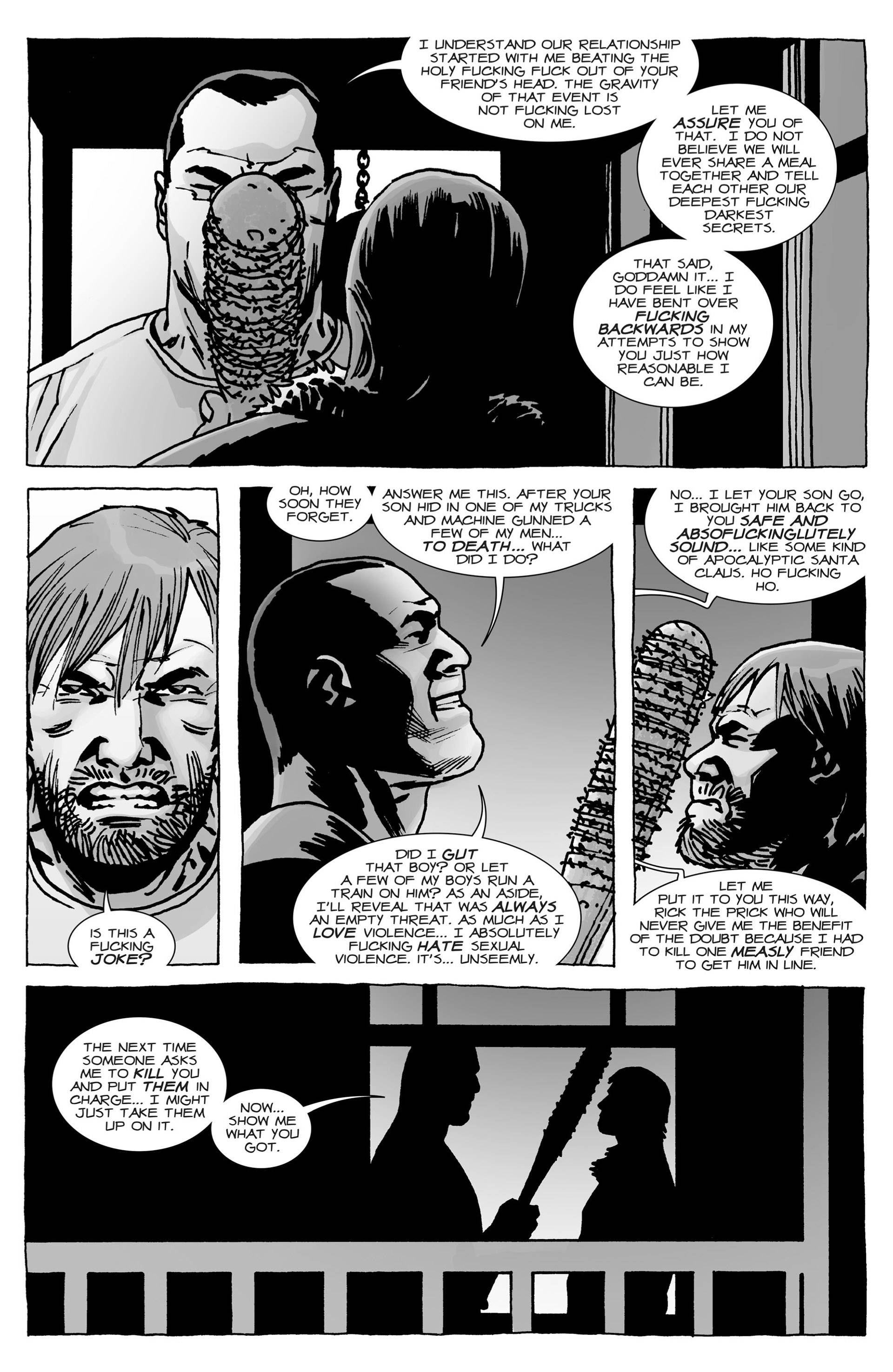 Both men misjudged the other.

I don't think Spencer actually wanted Rick dead. And while it's true that Rick probably is a better leader, it's not true that Spencer wasn't prepared to get his hands dirty and do what's necessary.

And actually, I would have liked to have seen a storyline where Spencer takes over and Rick is put into a secondary position, because while not as badass as Rick, Spencer was fairly charismatic, pragmatic, and again, not afraid to get his hands dirty - it's just that he wanted to play the long game with the Saviors. His whiny, "small" streak would probably have been negated by his taking control of the situation away from Rick for the time being, and he would have gotten on better with the Saviors (and possibly Negan) than Rick, who was constantly on the verge of losing his shit (PTSD?) because he was there when Abe and Glenn were killed. It may have worked better long-term.

But all Negan saw was a pampered-looking, fast-talking kid vs Rick the badass, and wrongly concluded that said kid was asking him to take said badass out for him (because Negan is a homicidal maniac himself), while all Spencer saw was a brutal, yet essentially reasonable, status quo adhering, same-civilisation-as-before-rebuilding guy who he, a politician, could deal with better than Rick, a short-sighted, reckless thug, ever could.

2
This Sorrowful Life car
4
What is this sign in Season 5, Episode 1?
19
Why aren't the zombies decomposed after all this time?
9
Character deaths in The Walking Dead show vs comic
7
Why does Eugene from the Walking Dead speak in this manner?
1
In season 1 of The Walking Dead, why does Jenner whisper it to Rick
4
Why does Negan keep saying he needs to shave?
4
Why don't they just escape from Negan?
2
Why does Dwight forget?
5
Why did Rick decide to keep Negan alive?