How were Sophie's interactions with the BFG filmed?

According to the BFG himself, he's a whoppin' 24 feet tall.

For the most part, the actress that plays Sophie does a good job of keeping her eyes "on" him, wherever his head is. She also avoids bumping into him.

Did they just have a head on a tall stick, like they did filming Ang Lee's Hulk? Was the voice/body actor for the BFG present?

I've seen much worse interaction with CGI come out of adult-cast movies, so I'm quite impressed with the results of Ruby Barnhill. But, I'm also wondering if they took extra aims to make it easier for her.

In my head, I just see set props on green everything, but think up how they got her to look in the light place or believably avoid objects. I know some movies used laser pointers, but I'm not sure that would work the same here because his sheer height!

Yes, they used a large green stick for reference, but also the actor was around.

In an interview with The Art of VFX, Jamie Beard, animation supervisor on the movie from Weta Digital (company behind all CGI shots), explains how they did the interaction between Sophie (Ruby Barnhill) and The BFG (Mark Rylance).

Can you tell us more about the various interactions between Sophie and The BFG?
We had many different methods for Sophie and the BFG to interact, most impressive of which were the full scale BFG rigs used when Sophie stands on his shoulder or sits in his hand. These could be operated or driven by animation to give a sense of movement. But despite these large scale aides it was always important that Mark Rylance and Ruby Barnhill were never performing to a ball on a stick. Thus, despite the technology available, the most effective setup was simply mimicking the eyelines (as if they were different scales) and performing very close together as if in a normal scene. That made sure we got an intimate performance.
Source: THE BFG: Jamie Beard - Animation Supervisor - Weta Digital, Oct 6, 2016. Consulted Jan 22, 2017.

In the same interview, Beard tells how they made the combination of live action and CGI (scale) so believable.

Can you explain in detail about the Performance Capture System?
On the BFG, scale was the biggest challenge compared with the way we normally shoot motion capture. Ideally everything you are capturing is in the same scale, but on this occasion we needed several motion capture stages to represent the different scales of the BFG, the larger giants and Sophie herself. So we constructed a range of sets and motion capture stages to exact scales. For example, we would first capture Mark Rylance as the BFG with the set built to his scale. Then we would move to a much larger scale set to complete the live action portion with Sophie so that she appeared under-sized in a land of giants. The best part here is that when filming the live action portions, the completed motion capture of Mark was simultaneously composited into the cameraman’s monitor. This meant that not only could Steven see Ruby standing there, but also the virtual BFG he shot earlier in the day. This way he was able to compose the shot with both scales. This was a very important step in making our work invisible so that Steven and his crew could operate as if shooting a traditional film.
Source: THE BFG: Jamie Beard - Animation Supervisor - Weta Digital, Oct 6, 2016. Consulted Jan 22, 2017.

This image set of the set of The BFG confirms above techniques. Actor Rylance stands near 'the BFG' for his lines and Barnhill is seen on the right. 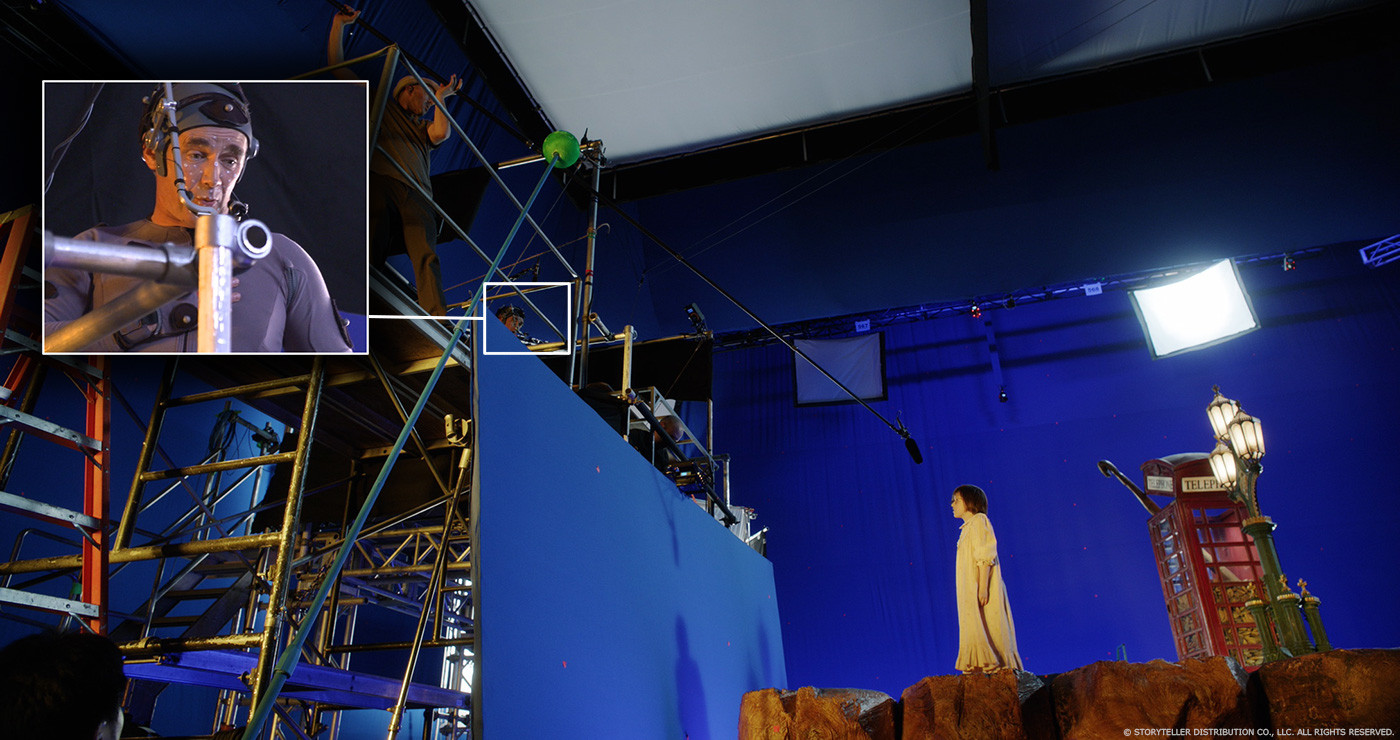 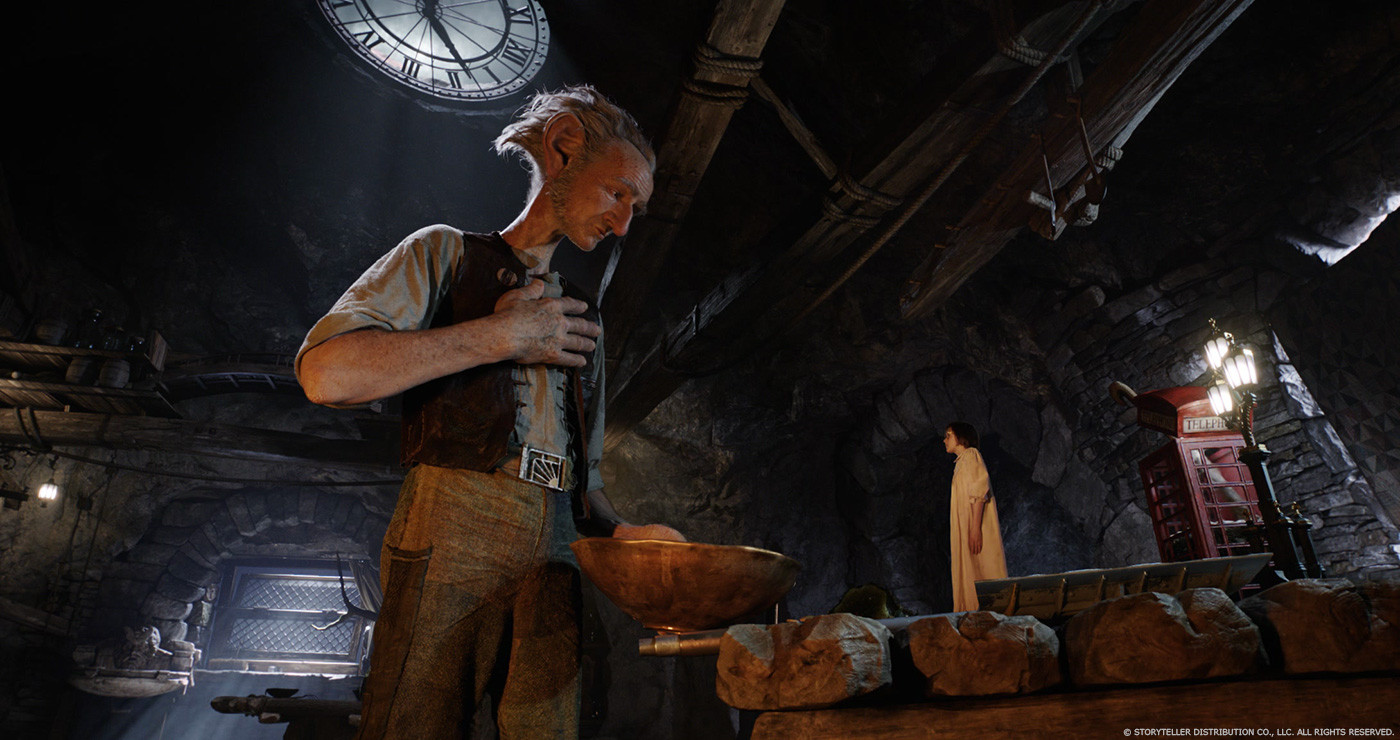 Photos are provided by The Art of VFX and courtesy of Storyteller Distribution Co., LLC. All rights reserved.

39
How is dialog between two people filmed?
17
How is a hanging scene filmed?
16
How were the scenes with Gazelle shot?
9
How "directed" were the activities filmed in Disney's Monkey Kingdom?
54
How do actors make eye contact with CGI characters?
26
How is blood coming from the mouth filmed?
4
How were the gravity scenes filmed in the movie “Deep Impact”?
11
How were Carrie Fisher's scenes filmed in The Rise of Skywalker?
13
How were the video screens in Chaplin's Modern Times filmed?