What's with the “cockatoo jump scare” in Citizen Kane? 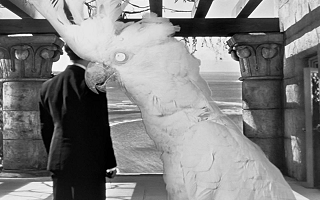 Youtube link to just before this "jump scare" happens

According to the internet, this painfully loud screech was Welles' attempt to wake up the viewer. For me it was a complete immersion breaker in an otherwise great film, and the "waking people up" explanation simply doesn't make any sense to me.

I understand that the missing eye is a technical error (like the infamous pterodactyls in another scene), but why did anyone think this particular scene needed to start with something loud and sudden enough to give people a heart attack?

Amazingly, the internet is right about this one. ;)

There are some other theories floating around about the symbolism behind this (a prevalent one is that this screeching pet bird flying away is superimposed over Susan, a bad opera singer, when she 'flies the coop' because that's how the shocked and bitter Kane imagines the situation). But Welles really has maintained that the cockatoo is there just to wake the audience up.

You see him briefly saying it in the clip that Oliver has provided in his comment - but even if you think it was just a throwaway joke there, you should know that Welles repeated this explanation several times. One of them was in an interview with director Peter Bogdanovich (available in Orson Welles's Citizen Kane: A Casebook), where Bogdanovich asks him about it repeatedly and Welles insists that there's no other meaning behind it, and I see no reason to believe he was joking there or lying to Bogdanovich. Here's the relevant segment:

PB: Why did you use that shrieking cockatoo?

OW: Yeah. Getting late in the evening, you know - time to brighten up anybody who might be nodding off. [laughs]

PB: It has no other purpose?

OW: Theatrical shock effect, if you want to be grand about it - you can say it's placed at a certain musical moment when I felt the need for something short and exclamatory. So it has a sort of purpose, but no meaning.

[And yes, Welles also confirms later in the interview that the see-through eye was just a glitch.]

Not the answer you're looking for? Browse other questions tagged citizen-kane .

18
In “Citizen Kane” does Bernstein purposely take a tumble into the newspaper office?
18
What is so good and unique about Citizen Kane?