Was Jim planning to open the Inn on Christmas Day?

In Holiday Inn, Jim goes back to New York to tell Ted about his idea of opening the inn. He says that he's been holding auditions everyday for a week, or something along those lines.

Later on, when Linda is there, he tells her he had prepared to sing "White Christmas" that night, Christmas night.

If he had still been holding auditions when he went to New York to tell Ted about the idea, on Christmas Eve, how could he have possibly thought the inn would be ready to open in time for Christmas the next day?

He had no performers, only Mamie and possibly a wait staff on hand.

From a quick re-watch (thanks) there's a couple of things I noticed.

Firstly, the Inn does seem to be pretty much functional when we first see it but although Ted does mention singing "White Christmas" at the Inn that night that's the only indication that the Inn is actually open.

Certainly, there don't seem to be any paying guests.

In fact, the very next scene is December 31st (New Year's Eve) and the newspaper notices mention that THAT is the opening night. 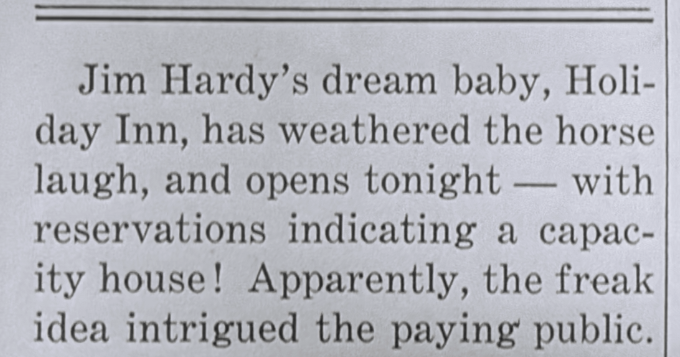 So, if anything, any 'performance' that Ted might have put on would have been for locals only...perhaps a 'soft open'.

Indeed, when we see the entertainment put on on December 31st, it seems to consist of only Ted, Linda and a small band..not a lavish floor show.

Not the answer you're looking for? Browse other questions tagged plot-explanation holiday-inn .

9
What career was Troy planning on?
6
Why was Jim so enthusiastic about Dwight's Christmas party?
3
Why does the Inn Keeper feel wronged?
3
Was Fenton Mikes planning the actions FBI agent in Frailty (2001)?
3
Was Joe being sarcastic after hearing about Jim?
11
Why was the Christmas present for Eurus so important?
12
Did Bill know that Elle Driver was planning to kill Budd?
2
Was the documentary crew recording Cece's Recital? Why Pam Couldn't Use that video?