Why did Johnny Cage leave his "friendship" offering after his fight with Scorpion?

In the 1995 film, Mortal Kombat, Johnny Cage leaves an autographed photo of himself following his fight with Scorpion.

A Friendship is a finishing move introduced in Mortal Kombat II in response to the public controversy surrounding the Fatality in the original Mortal Kombat. Friendships allowed players to perform various (and highly unlikely) acts of kindness and goodwill towards their helpless opponent instead of killing them after winning the match.

Johnny Cage has a fight with Scorpion in the film. Johnny Cage clearly defeats Scorpion and kills him. After Scorpion dies, there is an autographed photo of Johnny Cage that appears. 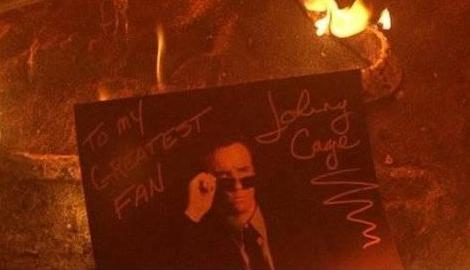 Absent the character we see on screen, the "friendship" offering in the games just becomes a silly way to end fights as the quote you provided described.

In the movie, though, we see that Johnny is portrayed as something of a self-centered egomaniac, a stereotypical Hollywood star. Case in point: he's fighting in another dimension, but still happens to have an autographed head shot on his person.

While the scene was likely inspired by the game event, it has a different context given Johnny's personality. Here, it's more of him marking his kill and/or spitting on Scorpion's grave. It also has a note of "You're just a fan, but I'm the real deal."

At a minimum, it's a good case of comic irony. Obviously, Scorpion, a demon trying to kill Johnny Cage is not Johnny's biggest fan. It provides some comic relief after we just see the skeleton-faced guy explode.

Of note, is that in the actual scene we don't see Johnny place the photo. It just kind of falls to the ground post-explosion, almost as if it fell off Johnny when he jumped away from the explosion. This further points to it just being for comedic effect. (Which, really, is the same purpose of the friendship finishes in the game)

And in the LaserDisc director's commentary:

Paul W.S. Anderson: This is something we just did as a joke, and we weren't really gonna keep it. You know, 'Where would Johnny have this thing in him?' But, he's cocky and arrogant and it was funny and it worked and we kept it.

Was it a friendship offering, though? Ever since I first saw this movie, I always took it as Scorpion having the autographed photo on his body and it being dropped after he died. I interpret it as Scorpion having gotten the signature off-screen somewhere, probably outside of his Mortal Kombat attire.

In that context, it changes the meaning of Johnny being cocky to Johnny having killed someone that was a fan of his, unbeknownst to him.

Not the answer you're looking for? Browse other questions tagged plot-explanation mortal-kombat .