Is Prairie an unreliable narrator?

In the hard-to-classify Neflix mystery/sciFi/supernatural series The OA, Prairie Johnson tells the story of her apparent disappearance for 7 years to a teacher and a group of school teenagers.

As far as we can tell from the parts of the story outside her narrative of her captivity, she has come back able to see when she was previously blind. She has strange scars on her back and she has been missing for some time.

But the narrative she tells of what happened to her during her disappearance is cast in some doubt by discoveries made by one of the teenagers in the last episode. Despite this the group still achieve something significant using some of the ideas she has communicated in her story.

Was she an unreliable narrator? How much of her tale was not true and if it wasn't how are we supposed to interpret her behaviour?

I think it's intentionally left vague and we can't draw a conclusion yet. We do know the following parts of her story are true:

We don't know whether any of the following is true:

We know that she had mental issues when she was adopted and was put on some sort of psychiatric drug. We also know that she thought something was going to happen at the school and she shows up right at the moment it happens.

Until they make a second season and explain more (which the creators have said they'd like to do), it's up to us to draw our own conclusions.

My take on "The OA" is that it is an expanded rehashing of some of their original ideas from "The Sound of My Voice", but serialized and expanded with a seedier foundation that hasn't fully come to fruition by the end of the first season.

You can read the plot summary for "The Sound of My Voice" on Wikipedia (https://en.wikipedia.org/wiki/Sound_of_My_Voice) where it's also linked to an interview with Batmanglij about wanting it to be the first of a trilogy.

The ending of "The Sound of My Voice" -- in my opinion and fuzzy memory of being really annoyed after watching it -- is very ambiguous as to whether the little girl is Brit Marling's mother, 'cause Brit Marling travelled back in time, or if she is actually Brit Marling's daughter, and she's a charismatic felon who was trying to get in touch with her estranged daughter, due to her illegal activities. If I'm remembering my annoyances correctly, it was suuuuper ambiguous, but I personally leaned towards the non-time-traveling answer, that's why I was frustrated.

"The OA" ends with a similar concept in a set of scenes, but I think they handled it much more clearly and with more bluntness, despite the subtlety and nuanced dialogue/acting in the show.

At the end of "The OA"'s first season, Alfonso (French), wanders into Prairie's adoptive home and looks around her bedroom, ultimately stumbling across a box of books, all of which have titles or topics related to the story she's been telling the group. The immediate reaction is to wonder if she is an unreliable narrator (being mentally unwell, or unstable in some manner), or even that maybe she's an outright liar, and has some other weirder broader plans she's setting-up by becoming this mythical figure to her group of five listeners.

However, when Alfonso is leaving and he runs into Elias (the FBI Counselor), I think it became super clear that Elias is actually suuuuper sketchy. Alfonso is there because he has questions and has been skeptical about "The OA", but Elias has absolutely no reason to be there, and it is super unethical as a counselor to go to his "patient"'s home in the middle of the night, invited or not. Because she's not even really his patient, he's been made available to her to support her as a trauma survivor, and ultimately to supposedly be helping her open-up to the FBI about what happened and how to save others and/or stop whoever took her and did whatever to her.

Personally, I missed it when watching at first, but then when Elias was there in the house, I knew instantly he was super sketchy, and I remembered a weird scene, so I went back to check and sure enough there's this: 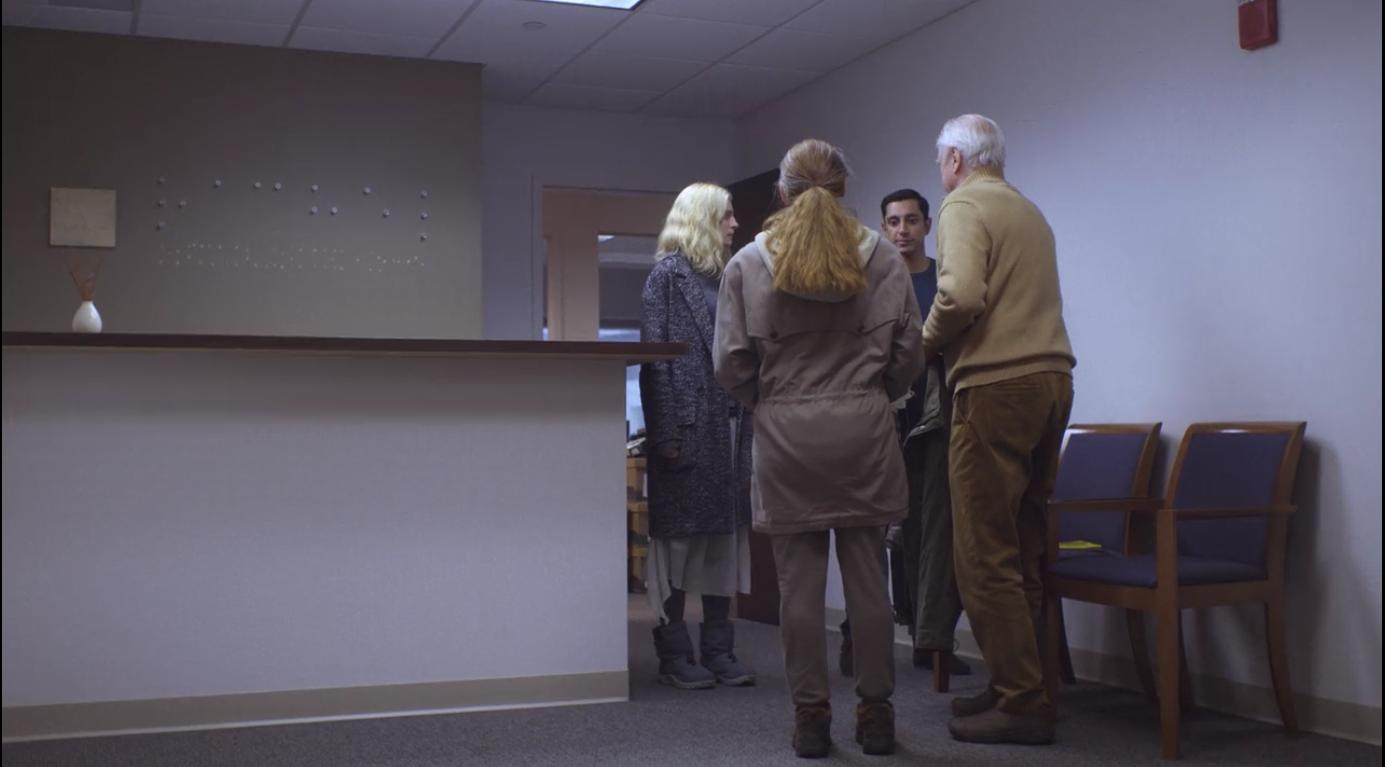 Elias is always meeting OA in this weird office building, presumably an FBI facility, but it's never explicitly explained. At first I wasn't totally weirded out because I thought those silver dots on the wall were just the studs from a sign that's been taken down, as if they're meeting in a building under renovation. No big deal, I thought. But then after seeing him in the house, I went back, got this screenshot, and that's actually braille for "RACHEL" !!!

Then I remembered that when OA described the 5 movements, she quickly but explicitly tosses out the statement "Rachel never received a movement", they had to learn the fifth movement from the Sheriff's wife when they cured her ALS using the first and second movements.

RACHEL IS A PLANT FROM A MYSTERIOUS ORGANIZATION USING ELIAS TO INTERROGATE THE OA UNDER THE GUISE OF BEING HER TRAUMA COUNSELOR !!!!

Also, to back this up even further, when OA is gardening with her adoptive Dad he asks her about community college courses she's signed-up for. Even if those books are hers and not planted by Elias, then they were all basic elementary English language books (Homer's "The Odyssey", etc.) that would fit right in with first year courses at a community college for her literature classes. She was so doped-up on antidepressants as a late-teen early-twenty-something that she clearly never really went to college and was doted on by her adoptive parents, always worrying about her.

My take on the first season is that The OA is an extremely reliable narrator, and that in fact it's possible that another child survived the bus crash, another oligarch's child, and that child could even be Rachel. She has her name in braille on this mysterious organization's lobby, and when The OA arrived "August" was dead in a bathtub upstairs, and Rachel was apparently sobbing and screaming over "August"'s death. Maybe even Rachel had something to do with "August"'s death, and it's all part of getting Prairie there into the basement so she can become The OA. I dunno, I'm rambling speculations at this point, but I think the ending was played as like maybe ambiguous, but when you go back and rewatch or if you watched carefully enough the first time, there is a hugely vast and sinister conspiracy underneath all of this, and somehow Rachel isn't who she seems to be, and she's related to Elias in some way, and it's probable that The OA is entirely telling the truth.

Hopefully this would all start to be revealed in subsequent seasons, deepening the mysteries and revelations.

Last note: I think it's amazing to have the sign in braille, even if it's non-sensical because 1) Prairie can read braille, but only by touch, she probably definitely can't read it by sight, 2) Sighted people aren't likely to be able to read braille, because it would normally serve no benefit. I think it's a brilliantly bizarre and f--- you kind of thing a secret (possibly evil) organization would do.

So, no, I don't think Prairie is unreliable, I think this is just the first season of a deeper and more expansive story.

(Which I truly truly loved and thought it was amazing and bizarre and beautiful and complex and honest and respectful and informative and totally insane.)

P.S. -- The sign clearly has subtext to the large "RACHEL" text, but I couldn't make it out. Also, I didn't check, but perhaps it's Russian Braille, or English Braille but a latin spelling of Russian words/names. I'd like to figure it out, but also anyone please feel free to chime in.

Not the answer you're looking for? Browse other questions tagged plot-explanation the-oa .

11
Why did French see himself as Homer in the mirror?

5
What was under the sink in A Tale of Two Sisters?
90
What really happened in Memento?
1
Who is the narrator in the movie Book Thief?
8
What happened to Robert Englund?
3
Why is 'loner leader' / Léa Seydoux against love in “ The lobster ”?
7
Why does Tyler Durden leave the Narrator taking his suitcase?
9
What crime are we to surmise that Prairie/OA has been accused or convicted of?
2
Why was Marla's life in danger according to The Narrator?