What is this blueprint that Zola grabs?

In the First Avenger, when Capt storms the base and frees the captured part of the 107th Regiment, the Red Skull sets the auto-destruct for the base. This causes Dr. Zola to scramble to grab some paperwork before running. One of the things he grabs is this blueprint. What is this blueprint of?

It seems to be a blueprint to his Robot Body.

In the comics (Wikia)

Needing funds to continue his research, Arnim Zola presented his first invention, the creation of device that would transfer someone's essence to a cloned body, to Adolf Hitler, who agreed to become his patron. This device and partnership allowed Hitler to survive World War II as the Hate-Monger. Zola also used it on himself, not only allowing him to survive into modern times but to also replace his normally frail body with a stronger, android one. This robot body allowed bipedal movement and projected an image of his original face on a screen located on it's chest.

Arnim Zola continued to work for the Allies, eventually becoming part of S.H.I.E.L.D. upon the organization's formation. After receiving a "terminal diagnosis" in 1972, Zola found a way to preserve his brain patterns via computer tape, and transcended death as an artificial intelligence. In the present day, Captain America and Black Widow discovered the secret complex within a bunker at Camp Lehigh where the computers containing Zola are kept, and learned from him that Hydra still existed as a conspiracy with a major branch within S.H.I.E.L.D. 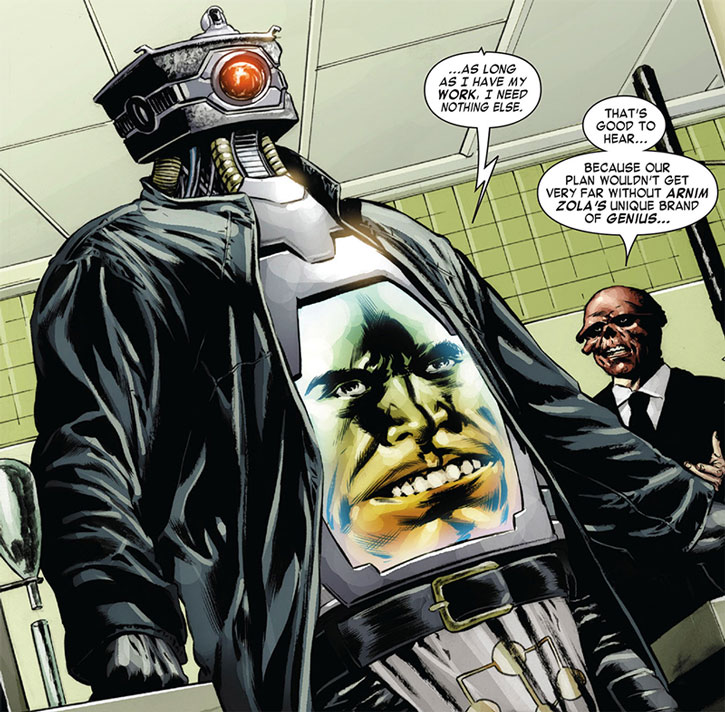 11
Why do we say that Captain America is the first avenger?
5
“New Jack City”: Pascal programming at a drug cartel?
4
What is this thing that brings Nicky back to life?
7
How did Bucky live this long without visible aging?
23
What happened to Red Skull at the end of Captain America - The First Avenger?
8
What did Thanos save this character from?
7
What was the monster's motivation in “Await Further Instructions”?
16
How did S.H.I.E.L.D lose ownership of this item?
29
What exactly did Ant-Man see that made him say that their plan worked?