Towards the end of the "Hero" movie we have a flashback story describing the fate of two lovers and swordmasters - Broken Sword and Flying Snow, but each time the story is slightly different and with different color theme (clothes, background colors):

First, the Nameless tells how he played the jealousy card: He describes how Snow cheated Sword with their common friend Sky, and how after Sky's death in fit of jealousy Sword sleeps with his servant and is subsequently killed by Snow, who is then too upset to fight properly and dies from Nameless's hand.
The theme for that story is RED

Second version is told by the Emperor, who doesn't believe in Nameless's lie: in this story Snow dies willingly after first wounding Sword (to prevent him from stopping her from sacrificing herself). Snow and Sword are tender lovers and the theme is BLUE 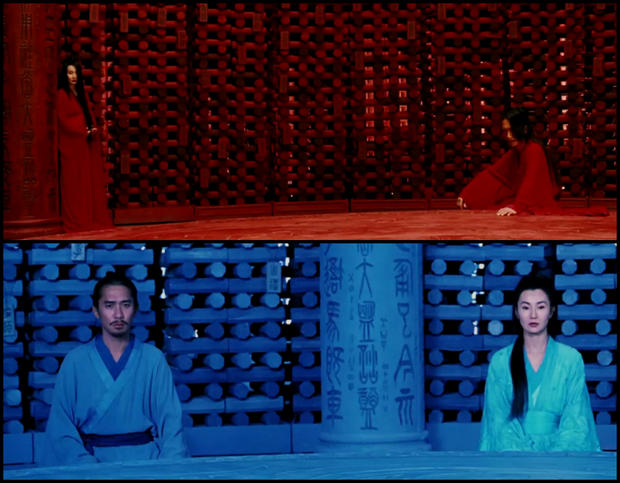 Third version tells that indeed Snow was willing to sacrifice herself, but her death was faked and that Sword opposes her and Nameless plan of killing the Emperor. This time, their robes and walls in the temple are WHITE

Lastly, in a flashback describing the first, failed attempt to assassinate the Emperor, we can see Snow and Sword dressed in PALE GREEN, the walls of the temple are also replaced with huge curtains in the same color.

I guess that the first, red color describes passion, but I'm bit lost at the symbolism of the rest. Is the blue there the color of sadness? Green for hope?

The use of the dominant color schemes is, indeed, meant to differentiate between the different version and story lines within the movie. However, according to writer/director Zhang Yimou, the choice of the particular colors, themselves, does not carry any special symbolism, and are more for aesthetic value -

IndieWire Magazine(IW): How did you come up with the color changes in the film - red, white, blue and green?

Zhang Yimou (ZY): Hero is not a traditional martial arts movie. It's very structurally presented. I like Rashomon, and thought I could use different colors to represent different parts of the movie.

IW: Why those particular colors - red, white and blue?

ZY: There's no particular meaning to each color. I just needed the colors to represent.....

ZY: Yes, yes. Each color represents a different period and different [way of telling the] story.

Still, that doesn't stop people from saying the the director is wrong or not telling the truth, and giving their own speculative interpretation. I guess that's the beauty of something like film as art - each viewer gets their own unique take or experience from it.

Not the answer you're looking for? Browse other questions tagged analysis hero .

14
Kid's pictures in Clint Eastwood's True Crime (1999)
16
What legends or stories is Hero (2002) based on?
4
Why the yellow-orange tinting of the entire movie?
8
Do the themes in "Moana" reflect Western or Pacifica themes?
14
What is the meaning of the color green in The Shape of Water?
13
What is the significance of different color uniforms in Star Trek reboot series?
5
Why did the Wachowskis change the story's themes so significantly?
5
Themes of Get Out
3
What are all the Shakespearean themes in Gargoyles?
4
What are the major themes of Alien: Covenant?