Westworld S01E02: How did they get to the park by an elevator inside a moving train?

There are pretty suitable explanations why the guests can't be harmed or how do the hosts work. Though, there is still something I can not figure out.

When the new two guests come into the Westworld in the second episode of the first series, they get to the park by an elevator that leads inside a moving train. How is this possible?

Is the Westworld park a real thing within the TV show? How else could they have gotten inside the moving train?

Is the Delos Westworld park a physical place in the TV show?

There is no doubt that the park is a physical place (although we don't know where it is).

You have to travel to the receiving area in a train (the white high-tech, bullet train version). 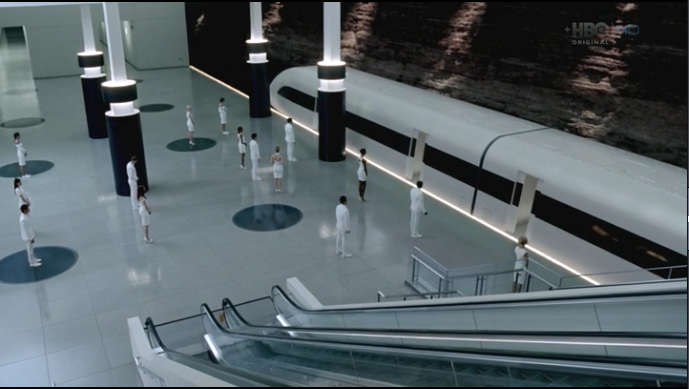 The hosts are physical constructs...we see them being made and interacted with in the inner workings of the park and they are put into storage when not being used.

they get to the park by an elevator that leads inside a moving train.

As for the elevator...there is no evidence that the train is moving when they board it. The scene suggests that the carriage is standing still until a certain point when it starts moving...as indicated by the overhead light starting to vibrate.

Then it seems that the 'Western' train simply comes out of a tunnel.

Not the answer you're looking for? Browse other questions tagged westworld-tv .

13
What protects the Westworld guests from injuries caused by weapons other than guns?
8
What exactly is the physiology of hosts in the Westworld TV series?

22
Have guns in Westworld started operating differently?
19
In Westworld, how can guests tell the difference between guests and hosts?
9
How do guests make requests in the WestWorld game?
7
Where is the Westworld park actually located?
7
Where is Shogunworld physically located?
11
How is it possible that Maeve can control Bernard?
9
What was Ford's intention for keeping the hosts for 35 years?
8
Is Robert Ford behind “Shade” too?