The connection with Napoleon Solo is often mentioned as is a reference to Solo Paper Cups [?] as a possible source...but, at least as far as I can tell, there is nothing definitive on this...at least quoting the "Word of Lucas".

There is a quote from Lucas I found about names in general. The article doesn't explicitly confirm Lucas' staying that the names are related but it too makes the association with Napoleon Solo but that might be the article's author's connection, not Lucas'.

''Basically, I developed the names for the characters phonetically,'' Mr. Lucas said. ''I obviously wanted to telegraph a bit of the character in the name. The names needed to sound unusual but not spacey. I wanted to stay away from the kind of science fiction names like Zenon and Zorba. They had to sound indigenous and have consistency between their names and their culture.'

It is interesting that the proposed Han Solo movie currently under production is doing to under the pseudonym... "Project Red Cup"

However, in early drafts of the Star Wars, script, the name Han Solo was already established but the character wasn't even human!

In fact, according to many sources, including biography.com

In fact, early drafts of Star Wars would be unrecognizable to even die hard fans: Luke Skywalker is a grizzled old general, Han Solo is a frog-like alien, there’s a main character named Kane Starkiller, and the dark side of the force is called “the Bogan.” 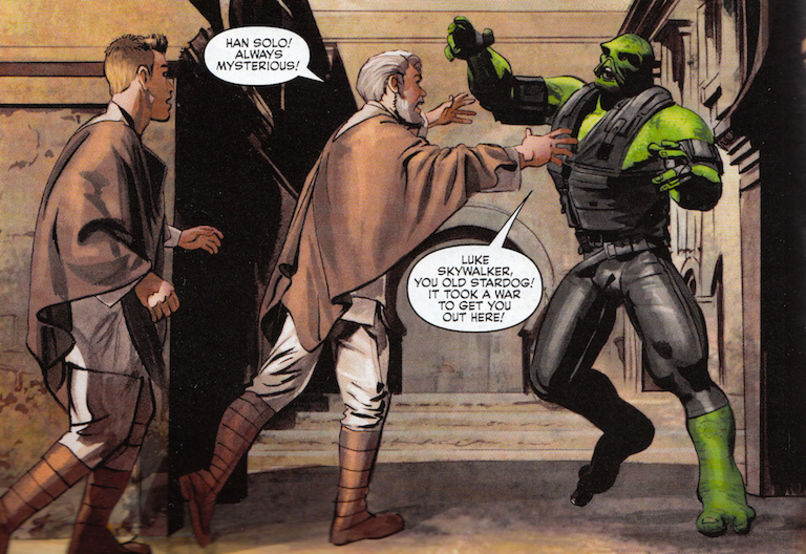 In the first draft of Star Wars, Han Solo was cast as a green alien, as depicted in a Dark Horse Comic adaptation of the script. (And in case you were wondering: Yes, frog Han shoots first.)

He's also been characterised as burly, bearded, and flamboyantly dressed, and has a guinea pig-like creature named Boma for a girlfriend and a two-hundred year-old Wookee companion named Chewbacca in other versions of the script.

Han Solo is no longer a green-skinned alien (like the bounty hunter Greedo) but a young Corellian pirate. In fact, Solo's character is drawn as a thinly disguised version of George's own mentor, Francis Ford Coppola.

I doubt there is any definitive source, but the Star Wars names belie a certain compulsion on Lucas' part to choose sound-alikes and conceptual names.

Greedo is obvious. Darth Vader is Dark Invader. Chewbacca is the Dog who ate his Homework (also Chewing Tobacco). Obi Wan Ken Obi (Obi is a sash or belt), Wan is white (either master or beginner, depending on martial art) and also can be a sound alike for San (an honorific). Ken is family or clan, and often Japanese names and words have an alliterative appearance to westerners.

"Han Solo" probably appealed to him as a mashup derived from "Handsome Loner."

Not the answer you're looking for? Browse other questions tagged character star-wars reference the-man-from-u.n.c.l.e-tv .

15
How did Napoleon Wilson come to his name?
10
Which is the correct pronunciation of Han in Star Wars?
11
What are these cartridges that many characters have in the Star Wars movies?
5
What previous works was Star Wars influenced by?
2
What's the term for a scene in a film that references previous material to make a perfect moment?
1
Was George Lucas inspired by philosophy of Buddhism or other philosophy to write the Star wars Scripts?
6
Where did Han and Chewie take a shower in Solo?
14
Time jumps in Star Wars
8
Planet at the end of Solo: A Star Wars Story
6
In what ways was "Star Wars" influenced by "The Hidden Fortress"?