I am looking for a Chinese martial arts old-school movie. At the end, the protagonist (portrayed by Jackie Chan, IIRC) battles against a horde of monks, presumably to be admitted to or graduated from the order. At some point (minor scene during the fight, but THAT very scene is what motivates me to ask about the movie) the monks circle him and attack him with poles; specifically, they lift him with the poles, rendering him immobilized (and possibly strangled).

Later (I believe that in the meantime the protagonist somehow managed to win the battle) the chief monk shows his true colors and turns out to be an "evil monk" (infiltrated at the order, looking for revenge; again, IIRC). The protagonist fights him and wins.

Please don't be misguided about my reference about Jackie Chan, though it is a very plausible one (I am Latin American: Jackie Chan movies were very popular at the 80s among us (and still continues to be, probably) ).

I believe you are looking for Shaolin Wooden Men.

In this film, Jackie Chan's character plays a mute whose father is killed. Jackie then goes on a quest to become a great martialist, training from various masters, and eventually fighting a ridiculous hallway of mechanical warriors. Ultimately it is revealed that the monk which runs a school killed his father, and Jackie confronts him.

Although the fight scene with the monks and the sticks isn't against Jackie Chan, it is quite drawn out with Jackie watching it. 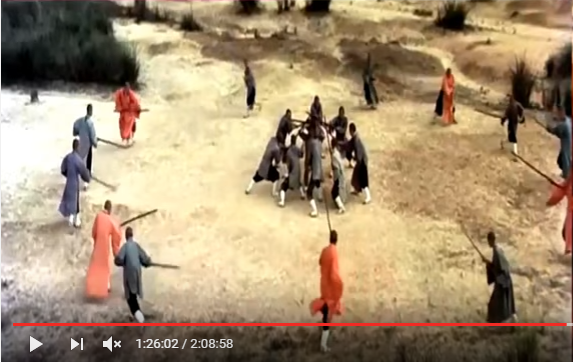 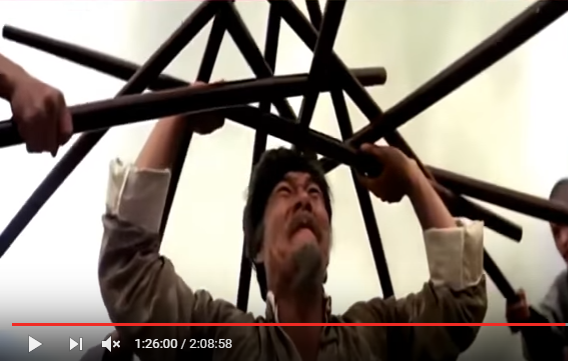 8
Is the martial arts choreography in the 2010 remake of Karate Kid realistic?
26
Did Keanu Reeves actually know martial arts when he acted for the movie “The Matrix”?
9
What's with the “wobbly” swords in Chinese martial arts movies?
2
What are all the martial arts styles seen in the Ip Man movies?