Yes, I mean this series:

Anyway, I'm not entirely sure if this is indeed an episode of the series since I cannot find an episode that fits what I'm gonna describe, but anyway, here are the story points:

Now either this is an episode from the tv series or the longer lengthed made for tv movies of the franchise, I dunno.

Actually, you seem to be looking for the spin off Young Hercules's pilot movie (essentially episode 0).

Alcmene, fearing she will lose her son, sends Hercules to Cheiron's academy. Once there, he meets up with Iolaus, a pain in the neck who he knew from his own village; Jason, The Crowned Prince of Corinth; and the female cadet Yvenna. Shortly after their introduction, the friends set sail with some fellow cadets on a mission. They must search for the Golden Fleece in order to save Jason's father who is on his death bed. Unbeknown to the cadets, is that Ares and Discord are the ones who put him there.

When Jason cures his father with the golden fleece, black-haired, bearded villain Ares immediately breaks his neck. And earlier on, Hercules and Jason fight on pillars while a centaur observes them. The latter scene was recreated in the show that followed, where the lead was played by Ryan Gosling. The movie is currently available here. 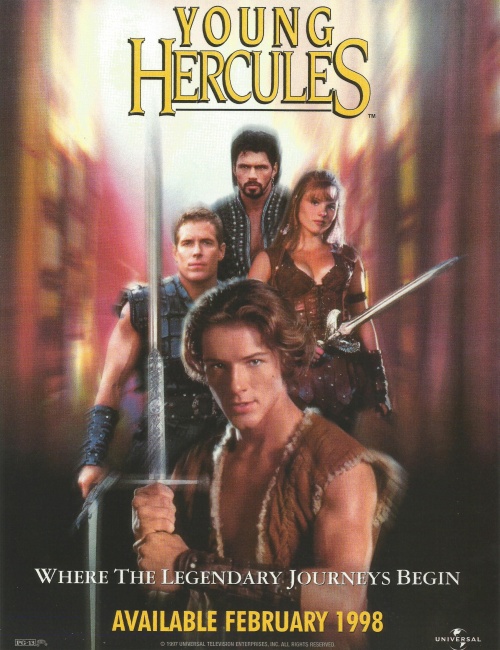