Why didn't the Dominators take up Mick Rory, a non-metahuman, while taking up the Team Arrow?

In The Flash, s3e8 named Invasion!, it was shown at the end of the episode that the Dominators abducted the Team Arrow with the purpose of

gathering information from their minds about metahumans, using hallucination as a distraction, to help them complete a special "weapon". 1

It was later concluded by Team Arrow in the following conversation:

Wait. Maybe they didn't choose us at random.

Maybe they chose us because we couldn't fight back

Because none of you are metahumans.

Mick Rory is also not a meta; he has a vivid rough past which could be a competent source for the hallucination.

Still he was not abducted by the Dominators.

Why was it so? Did they assume he had no enough information on metahumans? I don't think this is a valid reason for we all know Rory is well versed with metas.

Was it because he was along with Supergirl? But that doesn't make a justifiable argument either as Oliver was also with Barry.

So, why did the Dominators not abduct the non-metahuman Rory?

Both Mick Rory and Felicity Smoak ran into a building, keeping them out of reach of the teleportation beam

You're asking about Mick, but it's notable that the Dominators also did not take Felicity Smoak, a non-metahuman who had a history with all of the people who were captured and has worked extensively with S.T.A.R. Labs and Barry Allen (thus she would have been a valuable source of intel about metahumans).

The answer is the same for both of them. When Oliver and the others were captured, they were all standing out in the open. Felicity and Mick were together underneath an umbrella much closer to the building and then quickly ran into it once people were starting to be captured. 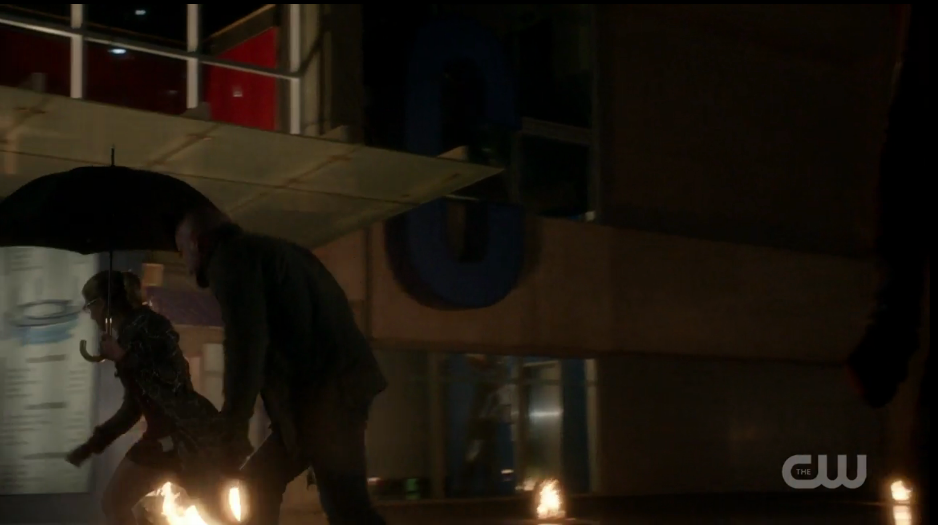 It seems that being off to the side and then inside the building made it impossible to be beamed up, unlike the others who were out in the open.

Because he would have been an anachronism in their shared hallucination.

All of the others have shared history (obviously as they are all Arrow characters originally) but none of them do with Mick (who started on The Flash).

By keeping the hallucination, at least mostly, internally consistent would have re-inforced the illusion.

A good question would be how the Dominators knew to only take Team Arrow!

19
Why was the "Green" removed from "Green Arrow"?
9
Why didn't Oliver wear the mask?
2
Why didn't Non use Superman to do his bidding?
4
Why did Arrow, unlike the other shows of the Arrowverse, pick a combination of its own individual logos in the Invasion crossover story arc?
4
Why does the team not know who the Reverse-Flash is?
9
Why didn't he take the kids?
4
Why didn't Devoe take Barry's power?
4
How did the team escape Lian Yu in Arrow
3
Why didn't Devoe use this power against the Flash?
4
Why didn't Arrow (Oliver Queen) just become part of the League of Assassins?