Why was the final landing scene selected for the movie's poster?

Why was the final landing scene selected for the Sully movie poster? 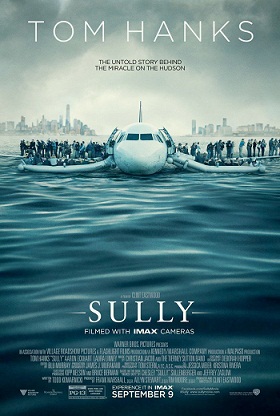 It clearly show us that the pilot landed the plane on the water somehow and thus reveals a significant part of the film's story.

Because the film is a dramatization of real events, most people (in the U.S., anyway) already know that Sully was successful in landing the plane. The film is designed to show people what they may not know, all of the drama before and after.

Showing the plane's successful landing isn't a spoiler because it's a matter of public record. From Wikipedia:

Sully (also known as Sully: Miracle on the Hudson) is a 2016 American biographical drama film directed by Clint Eastwood and written by Todd Komarnicki, based on the autobiography Highest Duty by Chesley Sullenberger and Jeffrey Zaslow. The film stars Tom Hanks as Sullenberger, with Aaron Eckhart, Laura Linney, Anna Gunn, Autumn Reeser, Holt McCallany, Jamey Sheridan, and Jerry Ferrara in supporting roles. The film follows Sullenberger's January 2009 emergency landing of US Airways Flight 1549 on the Hudson River, in which all 155 passengers and crew survived with only minor injuries, and the subsequent publicity and investigation.

Not the answer you're looking for? Browse other questions tagged posters sully .

2
Was it standard for studios to design/print posters for short films?
9
Why is the poster of The Theory of Everything rotated 90 degrees clockwise?
13
Did Jeff Skiles really say that?
22
Why was The Hard Candy poster made in reverse to the plot?
3
Why did the ATC operator seem like he was in trouble in Sully?
44
What is the meaning of this poster for The Lobster?
3
Why was the original tagline changed from the movie poster?
9
Why is the cut on the wrong side of Jason's hockey mask?
4
Was the poster for “The Green Mile” copied from something else?