Why does Starfire have a magical girl transformation scene?

In "Justice League vs Teen Titans", halfway in the film the Titans have their first fight against the Trigon demons. In this scene, Kori aka Starfire, is given a cliche anime magical girl transformation scene, where her street clothes magically get shred and her normal uniform/dress appears out of no where, with a magical glow censoring everything.

Why does she get this magical girl transformation scene? This is not typical of her powers, or of DC in general.

At least Jamie has an excuse, his battle armor has always been hidden inside the blue scarab fused with his spine.

She had that transformation scene as a nod to Sailor Moon as confirmed by Sam Liu and James Tucker themselves in this corresponding tweets: 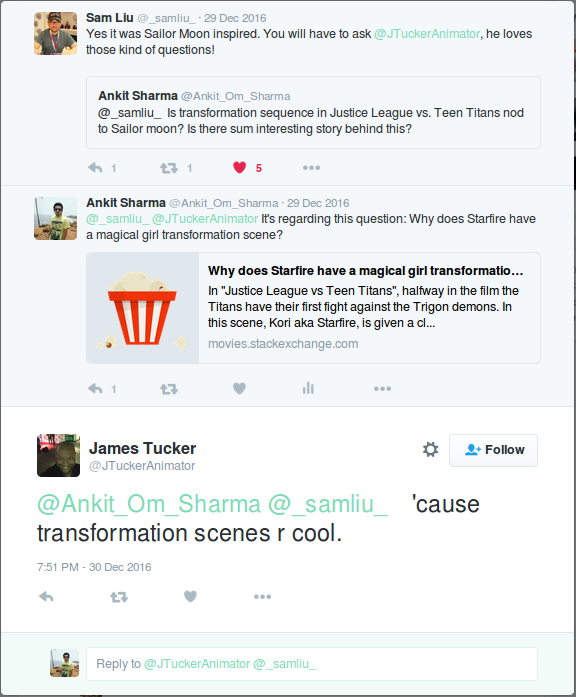 And it was there to make it look cool and it did look cool to me ;)

Not the answer you're looking for? Browse other questions tagged character dc-animated-movie-universe justice-league-vs-teen-titans .

11
Why does Jake from Adventure Time have inverted eyes?
3
Does Magnussen have any disorders?
6
What degree does Howard have?
4
Why does Superboy have Pithecophobia?
14
Why does the Wicked Witch "have no power here"?
2
Does Punisher have superpowers?
4
Why does Ty have so much money?
32
Why does Johnny Bravo have trouble finding a girl to date?
0
Does Charlotte have siblings?