What is the significance of the penguin in Fifteen Million Merits?

In Fifteen Million Merits, Abi made a penguin out of food packaging and gave it to Bingham "Bing" Madsen. 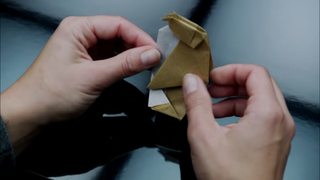 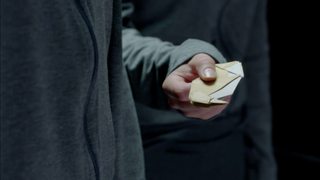 After accepting the job in avatar shipping portal, Bing gets a house with a real natural view but he still had a penguin statue and he even weirdly stared at it: 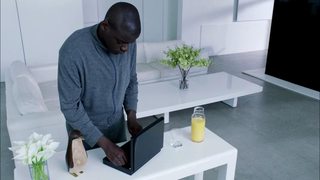 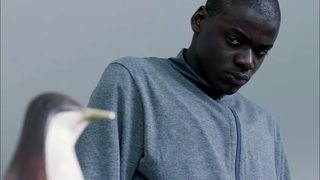 What is the significance of this penguin and its transition from paper to a real looking one? Is it a representation of his own transitioning? Or his symbol of his incomplete love?

Throughout the episode, Bing strives to find something real in his artificial world: Natural food (fruit), Abi's honesty and genuine talent, a real connection with someone. Folding a 'worthless' wrapper into an origami penguin gives it meaning: it's a simple, hand-crafted token, and later comes to represent Bing and Abi's relationship. It's something artful blossoming from humble origins (which is what Bing hopes Abi becomes, through the show, with his help) and a touch of humanity in a hi-tech existence. His speech near the end demonstrates how he yearns for the truth and how sick he is of fakery.

The penguin he has in the end, though, is a more realistic, less crude sculpture that seems expensive. In my opinion, it's on one hand a symbol of Bing succumbing to the inescapable artifice of his world after choosing to harness his 'truth' just to sell more products, and on the other a reminder of the love and authenticity he lost in Abi - or perhaps his attempt to preserve them in his upgraded, wealthier life.

If you notice when Bing sends her the golden ticket there is one penguin walking on the screen of Abi. I think it assures us that Abi love penguin. This penguin is the symbol of his love to Abi beside that crystal knife which stands for his hatred and his new powerful method for a living. Whatever you are they chose a position for you to make you a slave for the system. Even Being's hatred toward the system.

They earned credits pedaling which they spent on their avatars - accumulating virtual currency to purchase virtual "goods". Climbing out of that world, Bing can now spend what he earns on real, physical goods (the statue) instead of virtual "bling". That it happens to be a penguin is symbolic of his affection for Abi; that it is a physical thing is a reflection of his step up in the world.

Not the answer you're looking for? Browse other questions tagged analysis black-mirror .