Did Daryl Van Horne participate in group sex with the three women?

Daryl did seduce each of the women individually. He started with Alex and moved on to Jane and he seduced Sukie last. Alex and Jane were unaware of Daryl's intentions towards the two of them at first, but then just accepted his seduction of Sukie when the four of them were together. We know that Daryl had sexual relations with each of the women on a one-on-one basis:

Daryl: No. I wouldn't dream of seducing you, Alexandra. I wouldn't insult your intelligence with anything as trivial as seduction. But I would love to fuck you.

Daryl: Let it go. Let it fly. What are you afraid of? You have great passion in you. Let it out. I can take it. I want it.

Sukie: Are you going to seduce me, too?

Daryl seduces the women individually, but they seem to always be together in Daryl's mansion. There is gossip within the town, but to my knowledge, nothing is ever confirmed. They merely just say that they are all friends and Daryl calls the women "his girls."

There is a scene when the women come back to him depicting the three of them lying on his bed in provocative positions suggesting that something like this might have taken place, but the scene quickly cuts to the next morning and nothing is mentioned of it: 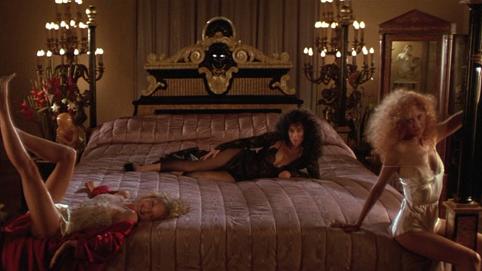 Is there any evidence that the three women actually have group sex with Daryl?

I think not, because as close as the three women are I don't see them as bi, I think that like Hugh Hefner he has a choosing of individual he has sex with

16
Why let Leamas and Nan escape?
9
Why did Daryl take the cash and jewelry?
3
The African Queen (1951) - did Charlie and Rosie have sex?
3
How did Iris correctly guess that Graham had sex with Amanda Woods?
7
Why did Daryl Van Horne target Felicia?
9
How did Janet Van Dyne survive in the Quantum Realm?
0
Did Adrian know Joe Doucett is going to have sex with Marie?
4
Did the rules about women reading change in Gilead?