Is a corn-only diet sufficient enough for the nutritional needs of the human body?

In Interstellar, due to crop blight they can only grow corn now. But is corn really sufficient enough to fulfill the nutritional needs of the human body? All the characters seem healthy enough, how is that possible with a corn-only diet?

In a world focus solely on farming to survive, it's likely that agricultural science, and genetic engineering of any and all crops is common place. Anything that natural corn can't produce, would get modified to include it. Corn itself is already heavily modified from its natural state, by years of selective breeding. Natural corn doesn't grow such thick husks.

But two key points. One, the blight is unrealistic:

There's a fundamental tenet of plant pathology called the disease triangle. It says that for any disease to spread widely it needs three things: a susceptible host, a pathogen, and the right environmental conditions. Take any one away, and the disease won't spread.

"It's very unlikely that a single superbug would spread across our diverse planet, or even do as well in Alaska as Peru."

And Two, the blight has not yet killed off Okra. This is the urgency that old Professor Brand talks about. That Okra is dying and soon, not yet, they will be left with just Corn. And those that don't due of starvation (or malnutrition), will suffocate eventually, in a generation or two. Meaning decades.

Brand: Blight. Wheat seven years ago. Okra this year. Now there's just corn.
Coop: And we're growing more than we ever have.
Brand: But like the potatoes in Ireland...
and the wheat in the Dust Bowl...
...the corn will die.
Soon.

Brand: Earth's atmosphere is 80 percent nitrogen. We don't even breathe nitrogen. Blight does. And as it thrives, our air gets less and less oxygen.
The last people to starve will be the first to suffocate.
And your daughter's generation... will be the last to survive on Earth.

Keep in mind 25 years Earth local time after Coop left, we start seeing pulmonary issues due to the blight. Coops grandson either has oxygen deprivation, nitrogen sickness, or complications from malnutrition. People are starting to die.

Nutritionally speaking, the answer is no. If you tried to survive on a diet of nothing but corn you'd soon die of malnutrition, initially succumbing to diarrhea and mental deficiencies, depression, skin lesions and over a longer period of time, developing full-blown pellagra due to a lack of niacian/Vitamin B3. The best guess (based on pig studies) is that you'd be dead within 6-8 months and incapable of self-care within about 4 months.

That being said, you could stave off these complications by synthesising a simple niacin supplement, something that even a first year chemistry student should be able to accomplish with a $20 home-chemistry set so the short answer is yes, with a few vitamin supplements added to their diet, you could feed a family indefinitely on nothing but corn.

The world of Interstellar

Within the film you don't actually see them eating a corn-only diet. 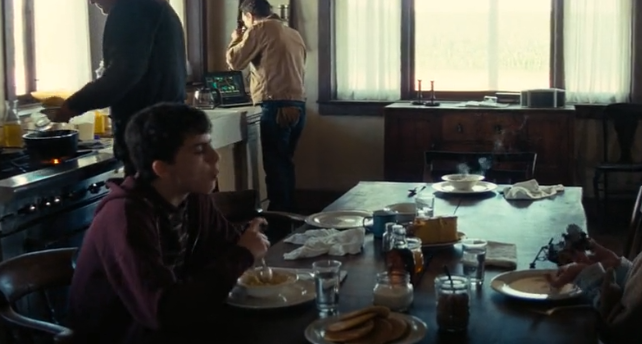 32
How did the watch do what it did?
12
How was the main problem dealt with?
9
Why and how did Cooper suspect that Amelia Brand had intimate feelings for Wolf Edmunds in Interstellar?
3
Was it realistic for Hannah to have enough strength to cut her second forearm after cutting the first so deeply?