How come Daenerys' hair is not burned while her clothes are?

In the TV series, Daenerys Targaryen is immune to fire. However, I am curious about a small technical aspect of this. As can be clearly seen in the below picture, taken from season 6, her clothes are totally burned, while her hair is intact. How can this be? Common sense tells that fire immunity will protect only the skin. Or at least my common sense. So, is this explained somewhere? 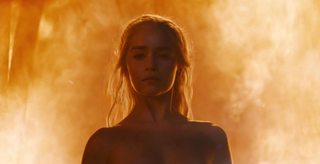 The only explanation is magic. She is conducting a powerful, blood and fire ritual to wake the sleeping dragons.

In the books, her hair does burn off. But even there, it is the magic of the ritual protects her.

Vox has an interesting discussion on it.

...in various interviews and discussions with fans since then, Martin has attempted to dispel what he has called the 'common misconception' that Targaryens are immune to fire. Years ago, he described what happened to Dany as "unique, magical, wondrous, a miracle," but said it 'probably' wouldn't happen to her again, and stressed that many other Targaryens have burnt to death.

But the Vox article also points out that there are there are three instances in the show of Dany being fireproof, so the rules for the television adaptation may be different.

This can be explained without (extra) magic

If Daenerys is immune to fire,
If Dany's hair is part of Dany,
And if Daenerys' clothing is not part of her,

One could reason that the hair would not burn and the clothing would.

As Obie pointed out in the comments, hair can be produced by fire resistant cells to also contain fire resistant materials, despite the fact that hair is not composed of cells, furthering the "it's part of her" arguement.

Additionally, saying "but hair is flammable, just like clothing" is not a valid arguement:
Humans tend to cook in flames, yet in these circumstances, Dany doesn't, so you could extend her range of fire resistance to every organically conceived part of her body.

Out of universe explanation:

In the book, her hair does burn. It's quite easy to write that happening.

In the series, they'd have had to go to the effort of making her at least look bald, then seem to gradually grow her hair back. Seeing as walking unharmed from a fire in a fantasy setting is always gonna be "because magic" then ya may as well leave her hair on. She looks better with it anyway.

Losing the clothes is far easier to achieve from a production standpoint, she doesn't look any worse without them, and her suddenly appearing in clothes next scene is easily explained - so they can be allowed to burn.

19
What is the relationship between Daenerys, Viserys, and dragons?
30
How come the Unsullied are overwhelmed so easily?
9
How come Maesters have not yet figured out what cured Shireen?
15
Why are the Queensguard in Game of Thrones (S07) wearing black armour?
10
Did Daenerys know how to hatch the dragon eggs?
10
How come the new monarch does not wear any crown?