Why does Superboy have Pithecophobia?

In Young Justice Season 1, in many episodes they get a villain related to ape/monkey family like M.O.N.Q.I.s (Mobile Optimal Neural Quotient Infiltrators), Monsieur Mallah, Ultra-Humanite etc. and Superboy constantly refers to his monkey hate (Pithecophobia). But what is the reason of Superboy's Pithecophobia? Is there any significance of it or is it just a plain in-joke only?

In the canon to the TV series Young Justice tie in comic #2, the happy harbor hideout, previously home to the Justice League, was attacked by the Joker. Connor was alone in the Cave after the Young Justice team moved in, and was infected by some mind altering object. This caused him to hallucinate that there was green monkeys with jet packs, related to the previous attack by the Joker.

Needless to say, Connor found out something about himself. That he hated monkeys. It's all the Joker's fault.

This is the incident that they refer to when Batman or Red Tornado says they had to change hideouts. 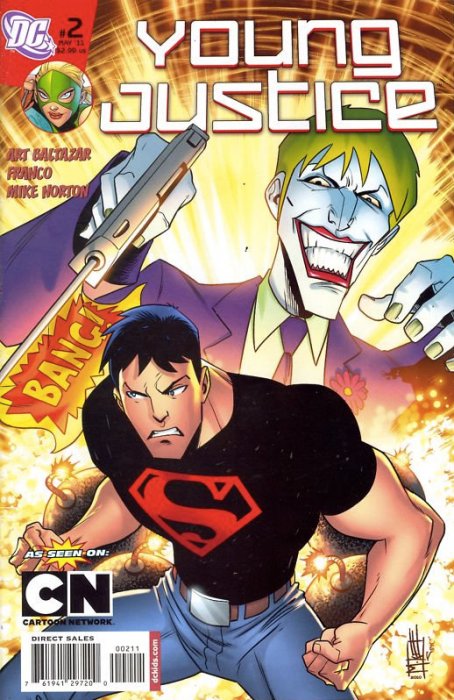 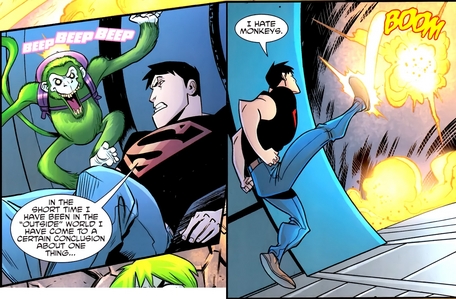 And as often as Superboy is attacked by monkeys, it's a completely rational hate.

P.S. Superboy hates, not fears, monkeys. So it would be pithecomisia, not pithecophobia. Different Greek suffix.

Not the answer you're looking for? Browse other questions tagged character young-justice .

3
Does Magnussen have any disorders?
6
What degree does Howard have?
5
Why is Robin made so young in the Young Justice, compared to his other teammates and comics counterpart?
4
Why does season 2 take place after a five-year time gap?
2
Why did the Green Lanterns reject Guy Gardner in the selection process of Justice League?
14
Why does the Wicked Witch "have no power here"?
2
Does Punisher have superpowers?
4
Why does Ty have so much money?
0
Does Charlotte have siblings?