Why is Robin made so young in the Young Justice, compared to his other teammates and comics counterpart?

In Young Justice, why did they make Robin so young? In the comics, Robin was the leader of the team and also not this young, but in the show, Kaldur'ahm (aka Aqualad) was made the leader and kind of appears as the eldest of the group. 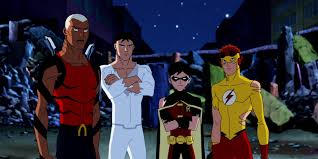 Even if we go by the height of all the guys, Robin has the shortest height. I even suspected him to be Tim Drake but I was wrong.

What was the reason for this change by the makers?

They wanted to create their own show.

Series co-creator Greg Weisman talked about how they wanted to do something different with Young Justice which wasn't Teen Titans 90s Young Justice, or JLU.

We were going to reset the DC Universe and start young with everyone under 16... We went through something like 50 dc teen heroes to build a team... Tried to get a diverse mix and put together a group that worked for us.

He goes on to say that they designed a new Aqualad, who isn't Garth, and the concept was from the ground up.

“Phil Bourassa, who is our lead character designer on the show, did the original design for Aqualad and Brandon and I basically created him; Geoff [Johns]came in and really liked the character and we talked about him a lot,” Vietti recalled. - cbr.com

In another interview he had this to say about the characters.

In some ways, this series is an adaptation of the entire DC Universe. But the key word is "adaptation". I strive (as does my "new" producing partner Brandon Vietti) with any adaptation (again cf SpecSpidey) to stay true to the spirit and intent of each and every character. But that doesn't mean there won't be changes. - Station Eight - Ask Greg

For the age question, from the same interview.

Brandon and I chose WALLY WEST as Kid Flash over Bart Allen as Impulse in part because it is EARLY DAYS in this particular DC UNIVERSE. And Wally was the original Kid Flash, just as Dick Grayson was the original Robin.

As to Robin's age.

Question: at what age did robin lose his parents?start being robin?

So he started as Robin at age 9, in Young Justice Season one he is age 13 (having been operating as Robin for 4 years with Batman). In season two he is age 18 as Nightwing.

They illustrate Dick Grayson as so young to emphasize what being Robin has done to him. He's 13 but acts much older. He's been matured by experience, jaded in some aspects. They drive this point home in the episode where the Justice League is debating YJ role in this universe.

Paraphrasing, Wonder Women calls Batman out for child endangerment, "You made another you", a dig at his anti hero vigilante gone too far loner rep. Batman replies ***"I did it so he WOULDN'T become like me", as Batman has moderates the revenge driven mentality. Unlike Bruce, Dick makes jokes and cracks a smile.

The younger Robin is, the more hope that he wouldn't be Batman 2.0

His age is also used to alienate him a bit amongst his peers. Which is why he develops defense mechanisms like his language gimmick.

Also, it's a way to make sure that Robin doesn't automatically get the leadership role in the team. Unlike every other instance of Robin as the clear leader amongst peers, he's now having to compete with other leaders like Aqua Lad. An older Dick wouldn't have the leadership failures that he did.

Not the answer you're looking for? Browse other questions tagged character production young-justice .

12
Why doesn't Robin appear in the Justice League and Justice League Unlimited animated series?
9
Why was Dawn Bellwether (sheep) depicted so small compared to other animals?
3
Did Young Justice purposely reference The Bourne series?
12
Why would a teen TV show need an FBI warning inside the Young Justice universe?
2
Why did the Green Lanterns reject Guy Gardner in the selection process of Justice League?
6
Why did DC Animated Universe skip Jason Todd/Red Hood?
4
What is the significance in Hawkeye and Widow for the team?
3
Where is Wade from s6e6 of walking dead in season 8?
16
Why did they avoid parodying Martian Manhunter?