Puppet-like fantasy characters. Female has wings while male does not [closed]

I'm looking for a fairly old movie. I guess its from somewhere around 1980 to 1990. I was watching the German version of it when I was a kid but don't know if its a British, American or German production.

The story is pretty dark, darker than the characters might suggest, I don't remember much of the plot though. Basically there were few races left in a fantasy world, two of them were similar in appearance, probably two tribes from the same race, but hostile towards one another. There was also some kind of connection between them. If one member of one tribe became ill or died the same would happen to one member of the other tribe as well and vice versa.

The male protagonist was of a third race and tasked by the "good" tribe to do something to or take something from the "bad" tribe. He later was accompanied by the female protagonist.
At one point, both of them were falling down some sort of pit and at this moment it is revealed that the females of the protagonists race have wings while the males do not.

The characters were quite possible puppets or animatronics.

You're describing "The Dark Crystal," 1982, a Jim Henson production billed as featuring no human actors at all. It's a kind of precursor to the lighter, more popular "Labyrinth."

The protagonists are "gelflings", thought to be extinct. The fact that female gelflings can fly is one of the big reveals of the movie. 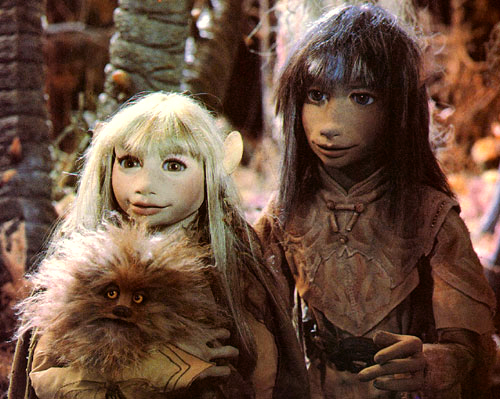